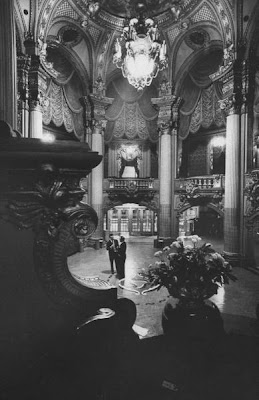 The Broadway community lost one of its greatest assets in 1989 with the closing of the Mark Hellinger Theatre. The Nederlanders, who owned the building, leased it to the Times Square Church for liturgical uses and eventually sold the building to the Church for $17,000,000 in 1994. Every time I pass 51st and Broadway, I look at the facade and there is a little part of me that looks on with a sense of mourning as it once housed some of the best and some of the worst of Broadway. Its history is one for the ages.
The theatre (originally the Hollywood Theatre), designed by architect Thomas W. Lamb, was built in 1930 by Warner Bros to serve as their premiere movie house in New York City (and the first to be designed specifically for the talking picture). So for the first several years of its existence, it was a cinema palace (whose original entrance was on Broadway; the 51st Street entrance and lobby was the secondary) then becoming a legitimate playhouse, before becoming a movie house again. Little sidenote to film fans (eg Esther): the world premiere of Casablanca occurred at this theatre in December 1942, prior to its LA release, which explains why a 1942 film is a 1943 Oscar winning Best Picture).
In 1949, the theatre was officially established as a Broadway house under the name Mark Hellinger (for the recently deceased critic and producer) with the musical All for Love. The venue is probably most famous for having housed the original production of My Fair Lady in 1956. However, there were many other productions: Two on the Aisle, Plain and Fancy, On a Clear Day You Can See Forever, Illya Darling, Dear World, Coco, Jesus Christ Superstar, Seesaw, 1600 Pennsylvania Avenue, the acclaimed Houston Grand Opera revival of Porgy and Bess in 1976, and Sugar Babies, the last commercial success to appear at the theatre. There wasn’t a singular success during the 80s, with shows such as A Doll’s Life, Merlin, the flop revival of Oliver! with Patti LuPone, Grind and Rags.
I was in NYC for brunch with a lot of the regulars: Sarah, Kari, Roxie, Esther, Jimmy Moon and Sarah’s friend Joe. When the uptowners ventured home via the 10, the foursome that was left: Roxie, Jimmy and Esther (both of whom had matinee tickets) and myself headed South. I was insistent to Roxie that we were to make a pilgrimage of sorts to the Times Square Church. Several months earlier I stopped in briefly on my way through town, however, there was a service going on and I was only able to get a brief glimpse into the lobby.
Much to my dismay, we found the doors locked. However, a person who appeared to be a worker there (they had just gone through an extensive renovation of the theatre and the marquee – the theatre is considered a landmark and its original integrity must be maintained), let us in and instructed us to go down the aisle to the front of house and just look up.
As I walked in down the aisle, there was this warmth that filled me as I stepped from out from under the overhang of the mezzanine. It was almost as if the opulent interior and the ghosts of all the performances that occurred at the theatre (Bert Lahr! Julie Andrews and Rex Harrison! Barbara Harris and John Cullum! Melina Mercouri! Angela Lansbury as Countess Aurelia! Katharine Hepburn! Patricia Routledge’s “Duet for One”!) The utter glory of the Mark Hellinger just threw us all for a loop. For several minutes, we just stood staring up at the ceiling, with its chandelier emblazing the pristine ceiling paintings. I took a glance around at my friends, whose jaws had succumbed to the forces of gravity (all the while realizing mine had as well). Stepping into the lobby was a similar experience. Grand, ornate, circular with draperies and such detail in the design, we were just as equally floored, with Esther and myself stepping over to read the plaque placed in the lobby in 1949 upon the dedication of the theatre to Mark Hellinger (written by his friend Walter Winchell).
Reflecting on this later in the Drama Bookstore, Roxie and I discussed how we both separately imagined first night crowds walking through the lobbies, with tuxedoes and evening gowns (ties, tails and fur coats, et al). Stepping inside takes you back to an era when going to the theatre was as glamorous every night as it was on opening night.
If there is one thing to lament in all of this, it’s only that the space is unlikely to ever become a theatre again. It was rumored that when the Nederlanders were looking to unload, they rejected an offer from Cameron Mackintosh to buy the property outright, instead selling it to the Times Square Church (which originated with services at Town Hall, and later leased the Hellinger when Legs Diamond closed in 1989). No offense to the ladies and gentlemen of the church, but I would prefer the space reverted back as a legitimate playhouse. Perhaps give the place a new name, such as the Hammerstein Theatre; with its 1500+ seats, it would be ideal for many a musical.
If you’re ever walking up around 51st and Broadway and have a few moments to spare, stop in and take a look at a piece of theatre history. Anything I’ve written here can’t even remotely begin to do the experience justice.
(Note: the photo above shows Alan Jay Lerner and Frederick Loewe in the lobby of the Hellinger in December 1956, as photographed for Life magazine by Gordon Parks).

One thought on “The Theatre Aficionado Goes to Church”