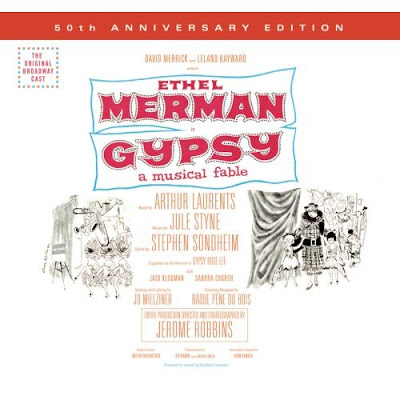 Next month marks the 50th anniversary of what Walter Kerr called “The best damn musical I’ve seen in years.” The musical, based on the memoirs of that memorable ecdysiast Gypsy Rose Lee, opened at the Broadway Theatre on May 21, 1959 (after a mere two previews) to great reviews and a memorable star turn from the irrepressible Ethel Merman. Arthur Laurents, in what would be prove to be his last credible success as a musical theatre librettist, contributed arguably the finest book in American musical history. Stephen Sondheim wrote the lyrics, and at the insistence of Ms. Merman, Jule Styne wrote the music. Jerome Robbins directed and choreographed. The show, which opened in New York just following the 1958-59 cut-off, would be trounced in the 1959-60 season by The Sound of Music and Fiorello! in what is so far the one and only Best Musical tie in Tony history. Merman famously lost the Tony to Mary Martin, headlining the more crowdpleasing Sound of Music, with the infamous quip from Ethel: “You can’t buck a nun.” The musical play ran 702 performances in NY before Ethel Merman went out on national tour. This original cast album is a must-have for any musical theater lover. There are a lot of people who insist that Merman’s performance is subpar (many of whom didn’t actually see it, but I digress); however she delivers an electrifying performance on the album. She is ably supported by Sandra Church, Jack Klugman and Maria Karnilova as Tessie Tura. With all due respect to all other recordings that have come along, I don’t think the orchestrations by Robert Ginzler and Sid Ramin have ever sounded better than they do here. (Though let it be said, all recordings of Gypsy are required listening). Also, it’s only right to mention Dick Perry, a favorite of Jule Styne’s, who rocks out the improv section on the overture like none other. Perry also played on the original cast albums of Subways Are for Sleeping and Funny Girl, serving as soloist for “Cornet Man” and even receiving billing for it. His credits include several other big 60s musicals, as well as trumpet player in the original “Tonight Show” band.
I currently own the 1999 Sony release that cleaned up the album and restored part of “You Gotta Get a Gimmick.” The album included previously unreleased demos of songs from the score, including some cut numbers, an early version of “Some People” and a combination of “Mr. Goldstone” and a tender “Little Lamb” sung by Ethel. On May 5, the original cast album will be re-released yet again by Sony Masterworks in a new 50th anniversary edition. This new release includes all material on the 40th anniversary release, but will also include an audio clip of Michael Feinstein interviewing Jule Styne, as well as a track on which Gypsy Rose Lee herself looks back on burlesque. Yes, I’m seriously considering the upgrade. Also, Masterworks is planning a similar 50th anniversary release of The Sound of Music this fall.