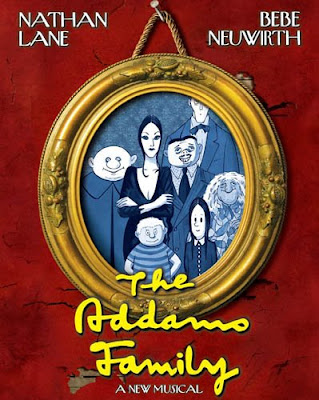 It’s been long in the works, but now it’s official. The Addams Family will be coming to Broadway as a musical next spring starring two-time Tony winners Nathan Lane and Bebe Neuwirth as Gomez and Morticia. The cast also features Kevin Chamberlin as Uncle Fester, Jackie Hoffman as Grandmama, Krysta Rodriguez as Wednesday and Adam Riegler (best known as impresario Cubby Bernstein) as Pugsley. Also on board are Terrence Mann, Carolee Carmello, Wesley Taylor and Zachary James.

Andrew Lippa has provided the score and Marshall Brickman and Rick Elice have written the book, which is actually original and not a screen to stage adaptation. From the offical press release: “Storm clouds are gathering over the Addams Family manse. Daughter Wednesday, now 18, is experiencing a sensation that surprises and disgusts her – caring about another person. Young Pugsley, jealous of his sister’s attention, begs her to keep torturing him, severely, while mother Morticia, conflicted over her daughter’s lurch into womanhood, fears being upstaged and discarded…. like yesterday’s road kill. All the while, father Gomez – master of the revels, mischievous and oblivious as ever – would prefer everything and everyone remain as it is. But when outsiders come to dinner, the events of one night will change forever this famously macabre family – a family so very different from your own…or maybe not.”

The musical has had industry workshops and readings, involving Lane and Neuwirth and will have an official out of town tryout at the Ford Center for the Performing Arts in Chicago starting November 13. The opening night in New York is slated for April 8, 2010 at a Nederlander Theatre to be announced.

Truth be told, I haven’t warmed to many of the newer musicals that have been opening, but I find that I cannot wait for this project. Word of mouth on the chat boards from insiders was very positive and signs point to this being a good musical comedy. Personally, some of the excitement for me lies in seeing authors doing something different with an established body of work. Instead of seeing the film or TV series just slapped onstage with self-referential and generic musical numbers, the creators are doing something unusual: being original.

Oh – and interesting fact: this will mark the first time that Bebe Neuwirth has ever created a role in a new Broadway musical. She replaced in A Chorus Line, Dancin’ and Fosse and won her two Tonys for revivals of Sweet Charity and Chicago, and was Lola in the ’94 revival of Damn Yankees.