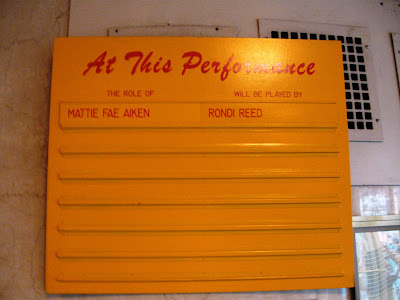 Most of you are well aware of my complete and total admiration for the Broadway production of August: Osage County, from my overwhelming adrenaline-fueled experience of its opening night onward. By the end of today’s closing performance at the Music Box, I had seen the play a total of seven times. Twice with Deanna Dunagan, twice with Estelle Parsons and twice with Phylicia Rashad (oh, and once with understudy Susanne Marley for good luck). The play never lost its spark or its edge with the departure of original cast members, remaining a strong vibrant piece of theatre that made an indelible mark on the Broadway scene 648 times, the longest-running play in seven years.

Today marked a final pilgrimage to a piece of theatre I respect and love wholeheartedly for its ambitious size and length, for its seamless and intelligent staging and above all else for its superlative acting. So I arrived at the Music Box Theatre expecting another mammoth three and a half hour catharsis. I didn’t expect to be taken completely by surprise.

At 1:45, I arrived at the Music Box Theatre to pick up my ticket at the box office. Turning away from the ticket window, I was organizing myself when I saw that a name was up on the understudy board. Curious, I walked over and I read “MATTIE FAE AIKEN – RONDI REED.” I read it a second time, and as that piece of info registered in my head, I proceeded to drop my ticket, my cell phone and my ipod. It took me about five minutes to recover, at which time I posted on twitter, facebook, text message and All That Chat. I just couldn’t contain my unbridled enthusiasm at this little tidbit.

Rondi Reed, a thirty year veteran of the Steppenwolf Ensemble, originated the part of Mattie Fae at Steppenwolf and transferred to Broadway, playing the role for six months and picking up the Tony Award for Best Featured Actress along the way. She was also part of the original London cast at the National Theatre this past November. Reed is currently back in NY playing Madame Morrible in the Broadway production of Wicked. For the last several months, Broadway legend Elizabeth Ashley had been playing the part, and I had seen her in the role only three weeks ago. It was an unexpected and unusual turn of events as actors who have departed the company rarely reappear for the final performance of the show.

Just before the house lights went down, the Stage Manager appeared onstage to make an announcement. She welcomed us to the theatre and production and disclaimed: “Unfortunately I’m sorry to tell you one of our cast members, Liz Ashley called us this morning and told us she was sick and unable to do today’s performance. But luckily for you, filling in for her today will be Rondi Reed (ROAR FROM CROWD… when the din died down she resumed) who played the role in the original company and won the Tony award for her performance.” She then took a moment to talk on behalf of the company about how grateful they were for the long and successful run, before the obligatory comment about cell phones, etc. Then we were off…

The performance was explosive. Phylicia Rashad became the one and only Violet I’ve ever seen earn entrance applause during the Prologue. The audience was even more enthusiastic when the lights came up on Rondi Reed, who was decked out in the revised costume designed for Liz Ashley, a loose fitting blouse that favored blue, and the open toe matching shoes as well. (One thing I’ve loved about this show is how they have managed to find variations in the costume design to fit each actor’s interpretation).

Reed, coming in at a moment’s notice had instant rapport with each and every actor and whose mere presence and voice took me back an entire year to the last time I saw her onstage. Her definitive delivery of so many of her lines brought me right back: “This situation is fraught” Just….show a little class…” “I’m having a cocktail!” “You have to tell us something!” and the deathless “That’s my casserole!!” All delivered with the same nuance and humor that earned this brilliant actress her Tony. I never thought I would see Rondi in this part again, which only heightened the experience for fans who were making one last visit. (To think that I saw Rondi Reed and Phylicia Rashad play off of each other as sisters for the one and only time during the run!)

Amy Morton was yet another to receive entrance applause. As I’ve often stated, Morton’s performance is one of the best I have ever seen in my life, a marriage between actor and role that is pure, unadulterated alchemy. Mariann Mayberry as Karen broke the collective heart of the audience. Even the more troublesome performance of Sally Murphy showed signs of considerable restraint, that is until the infamous “Eat the fish, bitch!” scene in the third act. It was at this point that Murphy dipped back into her bag of histrionic tricks, jumping an octave and screaming so unintelligibly that some vital lines were lost to the ages.

One of the most memorable scenes of the entire play is the notorious dinner scene at the end of the second act. Lasting twenty minutes, the family sits wearily and on edge as a drug-addled yet surprisingly lucid Violet eviscerates and excoriates every single person at the table (with the noted exception of her sister). Violet is driving at exposing truths among the family members, without a care as to the impact of her own words. Choices and spontaneity provided me with some unexpected moments: for example, I laughed to the point of tears at Rashad’s delivery of “Who ARRRRRRE you?” to Brian Kerwin’s Steve. The situation boils until Amy’s Barbara physically attacks Violet to take away her bottle of pills. The energy level at the moment was pitch perfect, with Barbara’s “I’M RUNNING THINGS NOW!!!” a total war cry at Violet and one that sent the audience into a cheering frenzy at the act-ending blackout.

Phylicia found such freshness in her approach that made for an even stronger performance than the one I had seen a mere three weeks ago. Violet Weston was beautifully served by Phylicia Rashad; the only tragedy here is that the show closed before most of you had the chance to witness her genius performance.

Ever the pro, Rondi Reed had to hustle out of the Music Box (where on the street she was met with an appreciative roar) in order to make it to the Gershwin Theatre. While Reed had called out for the matinee performance of Wicked, she was insistent on playing the Actor’s Fund show that evening. So after making her way through a complex three and a half hour drama, she had less than an hour to get costumed as Madame Morrible for the evening’s performance. I must tip my hat to such utter professionalism and energy. Reed is a one-of-a-kind actress and an absolute treasure to the NY theatre community. Also, if I’m not mistaken I think she is the only actor to ever appear in a Broadway play and musical on the same day.

The performance was overall rock solid; I could hear people crying during the final moments as the stage lights dimmed on Phylicia…wandering the house calling out the names of the family members who’d all abandoned her. By the time the lights were up for the curtain call, the house was already on its feet, cheering this brilliant ensemble for their fine work as well as saluting this captivating piece of theatre. Mariann started taking pictures from onstage, the actors left and house lights came up. Yet the audience didn’t budge. They sustained the applause and kept the momentum of their cheers up to warrant a second curtain call, something that didn’t even happen on opening night.

Waiting outside of the theatre was our beloved SarahB, who had been allowed in to see the final fifteen minutes. As I pulled myself together from the performance, none other than Tracy Letts walked by, with whom we spoke briefly and who signed our Playbills. I haven’t gone to the stage door in three years and though I considered it, I opted not to today. With a closing performance, it’s a crowded and hurried affair. But I did get a great picture courtesy of Sarah standing next to one of the billboards: 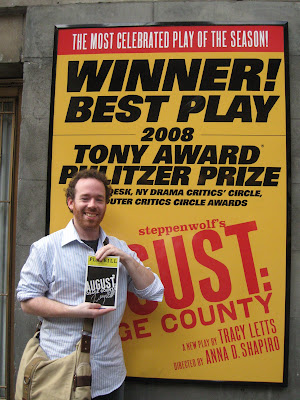 Sarah and I headed over to Angus, where we spent four hours knocking back concoctions and laughing about the good times we’d had while having many more. We had a blast with our congenial bartender and one of the waitresses, Sarah Fishbeck, with whom I attended college. The banter inevitably led to a discussion of all the shows that are coming up this season. Soon most of the theatres around Shubert Alley will be housing new shows. Finian’s Rainbow at the St. James, Memphis at the Shubert, Jude Law in Hamlet at the Broadhurst and Tracy Letts’ second Broadway play, Superior Donuts will settle into the Music Box this fall; the first play of the new season.

As always, the story goes on…