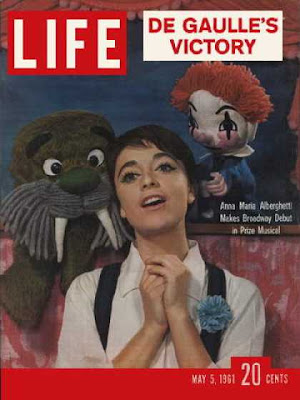 Earlier in the week it was announced that Leslie Caron would be joining Kristin Scott Thomas in the upcoming Paris production of A Little Night Music. If this is at all indicative of my thought processes, I was describing Caron’s career to a friend who had never heard of her and it had me thinking about the musical Carnival.

Caron’s film career got off to an auspicious start as Gene Kelly’s love interest in the 1951 Oscar winning Best Picture, An American in Paris (which has had a musical version in the works for years). She also starred in another Best Picture winner Gigi (later adapted for Broadway), the film version of the musical Fanny (which dropped the songs and adapted Harold Rome’s music for underscoring) and also a little gem of a film called Lili.

Lili, which premiered in 1953, was a hit for MGM garnering an Oscar nomination for Caron and co-starring Mel Ferrer, Jean-Pierre Aumont, Zsa Zsa Gabor and Kurt Kaznar. Based on a short story by Paul Gallico, it’s about an incredibly naive French orphan who is pretty much adopted by a traveling circus troupe. She’s in love with a slick magician who dismisses her as a child, all the while finding herself in a tempestuous relationship with a puppeteer who is embittered because war injuries permanently halted his career as a dancer. The film won an Oscar for its musical scoring (by Bronislau Kaper) and featured a hit song “Hi Lili, Hi Lo.”

In what was then a rare occurence, Lili was adapted from the screen as a Broadway musical, retitled Carnival (according to some sources it was Carnival!) The stage musical featured an entirely original score by Bob Merrill, quite easily his greatest achievement as a composer, with a book by Michael Stewart. (In lieu of using the hit film song, Merrill wrote an original song, the haunting “Love Makes the World Go Round” to take its place). Gower Champion made his Broadway directing debut under the guidance of producer David Merrick. Anna Maria Alberghetti in her only Broadway appearance played Lili, Jerry Orbach made his Main Stem bow as the puppeteer. Kaye Ballard took on the Zsa Zsa Gabor role.

The show opened at the Imperial Theatre on April 13, 1961 to rave reviews, winning a Tony for Alberghetti (in a tie with Diahann Carroll in No Strings) and its scenic design. It lost out on the big prize to the Pulitzer Prize winning satire How to Succeed in Business without Really Trying. An original London production opened in 1963 and failed after 34 performances. But aside from regional productions and a popular Encores! mounting starring Anne Hathaway and Brian Stokes Mitchell in 2002, the musical has not seen a major revival on Broadway or in London, though there was talk of an Encores! transfer (as is usually the case when one of their mountings is considered an artistic success).

The original production had its share of backstage lore. The most famous was the all out feud between Merrick and Alberghetti. One time when she called out for illness, Merrick believed her to be faking it and sent her a dozen dead (or depending on the source, plastic) roses and demanded she take a lie detector test. She hung his picture over the toilet in her bathroom. Merrick later claimed one his greatest achievements was “Making sure that Anna Maria Alberghetti never worked on Broadway again.”

Also, Alberghetti was apparently the first actress in a Broadway musical to use a body mike during a performance. During one performance, the actress exited on cue and had two minutes until she reappeared, bee-lining for the ladies room. However, this particular time the actress forgot to turn off her microphone, so during the middle of the show the audience heard the sound of streaming water followed by an unceremonious flush (which in itself was followed by Algerghetti’s re-entry). The audience was beside itself with laughter, but that’s the beauty of live theatre…

In spite of all this, Alberghetti was the toast of Broadway. Susan Watson, Anita Gillette and Carla Alberghetti (you guessed it, her sister) all played Lili during the Broadway run while Ed Ames replaced Jerry Orbach. Another amusing anecdote, this time from Ms. Gillette, was relayed in the dishy Making it on Broadway. When she took over the role of Lili, she was asked if she wanted her name put above the title. She said yes (I mean, who wouldn’t?). A few weeks later she received a bill from the company manager for the cost of the sign. It wasn’t in her contract. She took it to Equity and lost.

I think it’s high time someone revived the show on Broadway, it has such a beautiful score that deserves to be better known than it is. But until we reach that day, here she is, the Tony-winning original assisted by the company performing the spirited “Yes My Heart” followed by Jerry Orbach’s devastating ballad “Her Face” from an appearance on Ed Sullivan: