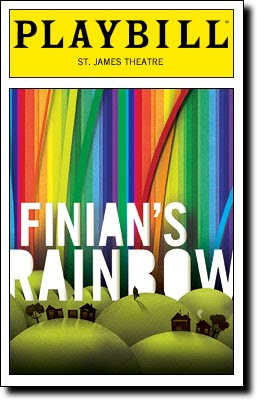 The powers that be behind the Roundabout revival of Bye Bye Birdie, the new textbook example of how not to revive a second-tier Golden Age property, should look to the St. James Theatre to learn a thing or two. The seemingly unrevivable Finian’s Rainbow has made its way back to Broadway in a loving, vibrant production that illustrates the enchanting wit and charm that made the show a resounding success in its original production.

The musical, last seen on Broadway in 1960, has had something of a problem in receiving a full-scale revival. The libretto by Fred Saidy and lyricist Yip Harburg is generally considered the deal-breaker in resuscitating the show. While it combines elements of fantasy and whimsy with a satiric look at racial bigotry and capitalism, the book has long been considered dated, and rightly so. It is dated. Finian’s Rainbow was a period satire written in 1947 that surprised audiences with its storyline, which included a white racist senator being transformed onstage into a black man, with the use of black face. The stage trick worked for a 1940s audience, but would prove disconcerting to our more racially aware society. There’s also a leprechaun turning mortal while looking for a stolen pot of gold, a mute who communicates solely through dance, among other hijinks.

The Encores! presentation brought in resident script doctor David Ives to condense the problematic book, but in doing so left much to be desired as too much of the story was stripped away. A brand new adaptation has been arranged for the Broadway transfer, executed by Arthur Perlman which is a considerable improvement. While it doesn’t completely smooth out the script’s roughest edges, it manages to make them somewhat more palatable. (And I do love the exchange between Finian and Og involving popular musical theatre lyrics of the time).

Kate Baldwin is effervescent as Sharon McLonergan, a feisty colleen finding herself transplanted from her native Ireland to Rainbow Valley, Missitucky on her father’s whim. Sharon’s first song of the evening is the popular “How Are Things in Glocca Mora?” and Baldwin’s simple, lucid interpretation is the most spellbinding I’ve ever heard. Cheyenne Jackson is her paramour Woody, the town’s hero, who cuts a dashing figure and sings well, but is, dare I say it, wooden. Jim Norton ties together the entire production as Finian McLonergan, who incites chaos by stealing a pot of gold from a leprechaun in one of the more outrageous get-rich quick schemes known to drama. With a twinkle in his eye, and a skip in his gait, Norton appears to be having the time of his life.

There has been some recasting of roles since the Encores concert. Christopher Fitzgerald brings considerable comic charm and impishness to the leprechaun Og, and is a versatile improvement over his predecessor. David Schramm (Roy from Wings) plays Senator Rawkins with a vivacity reminiscent of the late Burl Ives, while his counterpart Chuck Cooper has a field day with the second act number “The Begat.” (It boggles my mind that no one ever thought of double casting the part before). Audience favorite Terri White belts out the rafter-shaking “Necessity,” repeating her duties from the Encores concert. However, one major difference – her performance on Broadway (as written and staged) was more of a genuine supporting turn rather than the glorified cameo it was at Encores.

Warren Carlyle’s staging and choreography are full and energetic, with “If This Isn’t Love” practically stopping the show. His earlier work from the Encores! production has been expanded and adds a certain clarity to what is essentially a convoluted story. He has the light touch necessary to bring his cast of 30 above and beyond what is normally expected from this show, and it would be interesting to see his work on top tier Golden Age material. (I wonder if he might be the man for Carnival!). The costume and lighting design are sumptuous, however, the set design by John Lee Beatty is surprisingly unattractive. There is a lovely patchwork show curtain, but the unit set is a gaudy extension of the Encores set up, which is unfortunate since the orchestra was moved to the pit.

As it was at Encores, the real star of the evening is the music of Burton Lane and lyrics of Yip Harburg. Harburg was known especially for his word play, and his tongue in cheek playfulness with the English language is complemented by Lane’s sophisticated use of melody. I dare you to leave Finian’s without one at least one of those songs running through your head. I’ve always admired its score. Harburg’s lyrics are always superlative (even his work in the flop Darling of the Day is better than most contemporary successes) and Lane is one of our most underrated composers (I enjoy On a Clear Day and even Carmelina). The score is one superb musical delight after another.

I should confess, I was never a big fan of Finian’s Rainbow. It’s story and script have left me rather cold over the years, and that certainly wasn’t helped by the tepid film adaptation or Ella Logan’s bizarre idiosyncratic performance as Sharon on the original cast album (one of the rare occurences where I prefer a revival album to the original). However, the vivacity of this production has made me reassess my opinion of the entire show, as I find myself hoping to make a return visit.

When the show played the City Center last March, I still wasn’t entirely convinced that it was worthy of a Broadway run. (The only Encores! I’ve ever felt was ready for Broadway was the superlative No No Nanette from 2008). However, in bringing Finian’s Rainbow to the St. James, much care has gone into making it a fully realized evening, and one with warmth to spare. For whatever quibbles there are with the script, the polish and poise in Carlyle’s production is enough to keep you smiling long after you’ve gone home looking for your own rainbow.

One thought on “"Finian’s Rainbow" Shines on Broadway”