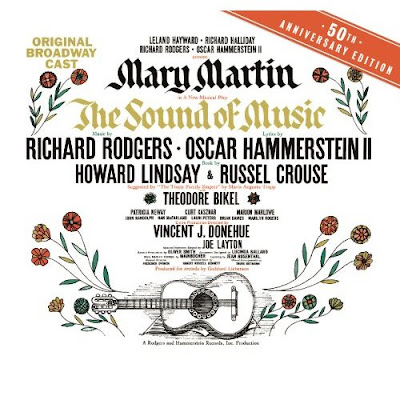 Due to the overwhelming success of the film adaptation of The Sound of Music, the original stage production often gets lost in the shuffle. The soundtrack is infinitely more popular. Julie Andrews is still a cultural icon and likely to remain so for generations to come. Not to mention the film is still one of the most successful of all time, having broken countless records on its initial release in 1965. And I must confess, the film adaptation is one of the few cinematic adaptations that is an improvement on the original stage source. The show originally opened at the Lunt-Fontanne Theatre on November 16, 1959 and in celebration of the Golden Anniversary, Masterworks Broadway has reissued the original cast album.

The Sound of Music, which was inspired by the story of Maria von Trapp and her family’s escape from Nazi occupation in Austria, starred three-time Tony winner Mary Martin. Vincent J. Donehue, the musical’s director, had seen the German films based on the Trapp story and thought they would make a good stage vehicle for Martin, as opposed to a proposed Paramount film starring Audrey Hepburn. They brought on Howard Lindsay and Russel Crouse, who had written the smash hit Life with Father and the libretto for the hit Irving Berlin-Ethel Merman vehicle Call Me Madam, to adapt the story for stage. The original idea was to create a play with music, using actual pieces sung by the family. Things changed when Martin approached Rodgers and Hammerstein, the men behind her greatest stage triumph South Pacific, to write a special song for her. They balked at that idea, insisting that would only write a full scale musical.

When the show opened, it was met with mixed notices. While the score was pleasant, the story and libretto weren’t up to the usual standard of the R&H canon. Their reputation for musical theatre had been to advance the artform, and this was seen by many critics as a step backward. (It was also the only show where Hammerstein didn’t have a direct hand in the libretto, so one can speculate if that might have contributed to the leaden book). For some critics, the presence of seven children, happy singing nuns and bad boy Nazis in a swirl of lederhosen and strudel proved far too treacly and reeked of moldy operetta. However, the critics did little to quell the audience response to the show. It had an advance of $2 million, and would run for 1,443 performances on Broadway and for 2,385 performances in the record-breaking original London engagement. It was to be the final Rodgers & Hammerstein musical, as Oscar Hammerstein died on August 23, 1960 from cancer.

At the 1960 Tonys, Martin famously bested Merman (then appearing in Gypsy) for Best Actress. (The Merm’s equally famous response “Well, you can’t buck a nun.”) Opera singer Patricia Neway won Best Featured Actress, Oliver Smith won for his Scenic Design and Frederick Dvonch won for his Conducting and Musical Direction. In an unprecedented twist, the show tied for the Best Musical Tony with the Pulitzer Prize winning Fiorello! (Gypsy, arguably the best musical ever written, went home empty-handed that night). The original cast album was released by Columbia records, and proved to be a best-seller. I have the original LP release and it’s one of those lavish gatefolds that opens up with pictures and text.

While I have had a long love affair with the film version, when it comes to actually listening to the score I tend to play the original cast album more often. Martin, who at 46 was far too old to play a postulant, was nevertheless a charmer. While her singing won’t erase your memories of Andrews’ crisp soprano, the cast album performance exudes that warmth and star quality that made her popular with audiences for years. Martin herself said that her voice never recovered from years of belting Annie Get Your Gun and her instrument, rather fragile to begin with went into decline over the rest of her career. Others I know have issue with her performance on this album, but for me it’s Jennie where things really started to become noticably problematic. I feel her performance can be summed up in one fraction of a second: her giggle at the end of “Do-Re-Mi.” That giggle sums up the personality that was Mary Martin – charming, warm and playful; the embodiment of the star presence that made her an audience favorite for thirty years.

It’s also interesting to compare the stage score with its film counterpart. “My Favorite Things” is originally sung by Maria and the Reverend Mother (Patricia Neway) in the scene before Maria leaves for the von Trapp home. “The Lonely Goatherd” was sung to quell the children’s fears during the thunderstorm. Max and Elsa (Kurt Kaznar and Marion Marlowe) had two dynamite numbers onstage: the droll “How Can Love Survive?” in the first act and the unusually catchy “No Way to Stop It” to start the second. The supporting cast on the album is superlative.
Neway’s Mother Abbess is my favorite on record, delivering a stirring, dignified rendition of “Climb Ev’ry Mountain.” Actor/folk singer Theodore Bikel offers a tender rendition of “Edelweiss,” the last song written by Rodgers and Hammerstein. The only dud in the entire score, and one of the worst songs ever written by R&H, is the lugubrious “An Ordinary Couple” which was replaced with “Something Good” for the movie. The original cast album was also produced by the master, Goddard Lieberson and boasts the orchestrations of Robert Russell Bennett and the choral arrangements of Trude Rittman.

The album was previously remastered and reissued in 1998. The original material remains the same, though the album itself is now packaged in an environmentally friendly cardboard sleeve. However, there are new bonus tracks with this new release. The most substantial is the highly amusing “From Switzerland: The Family Pratt,” which features Julie Andrews and Carol Burnett in their 1962 TV spoof of the musical (Sony should get that whole special out on CD). There is also a cut from the live 2005 Austrian cast album performance of “Edelweiss,” which was the first time the show was ever staged in the country (the Austrians have long harbored an aversion to the von Trapp story). Finally there is unexpected curio: Tommy Korberg, who was The Russian on the concept album and in the original London production of Chess, singing “Climb Ev’ry Mountain” in Swedish.

There are also brand new liner notes by Bert Fink, Senior Vice President for Communications at the Rodgers & Hammerstein Organization, offering a concise and informative essay on the show’s history as well as some background on the bonus material. The usual production photos are dispersed throughout, but this time there are also some new shots from the actual recording session (Nov. 22, 1959 at Columbia’s 30th Street Studios), including Bikel with the kids during a break, and Martin embracing the kids during a take. There is also a picture of a very soulful Neway recording her aria. For those who already have this album on disc, I only suggest upgrading for the purists among you who want the new tracks and notes. However, if you don’t own this cast album, I can’t recommend it enough. It’ll never supplant the beloved soundtrack for many of you, but it does offer a warm and inviting alternate reading of a long beloved score.

In the spirit of the 50th anniversary, Simon and Schuster has also released a Classic Collectible Pop-Up book of The Sound of Music, adapted by Mr. Fink, with illustrations by Dan Andreasan and paper engineering by Bruce Foster. Adapted from the Lindsay and Crouse libretto, Fink has streamlined the script into an engaging storybook text, with many of the score’s most well known lyrics incorporated into the book. I am rather impressed with how each page creates such an intricate three dimensional image based on the show, and further smaller surprises in the smaller flip-out sections of the book. I never thought I’d ever find myself reading a children’s pop-up book, but I’m most amused that I have. It’s not suitable for children under three years, so I’m going to have to wait a couple years before I can let the Baby Jack get his hands on it.

Note: Today is the show’s 50th anniversary, and there is going to be a celebration at the Lincoln Center Barnes & Noble at 66th and Broadway this afternoon with guest appearances by original cast members Theodore Bikel, Lauri Peters and Brian Davies. Mary Rodgers, Anna Crouse (daughter of Russel) and Maria von Trapp’s grandson Sam von Trapp will be special guests at the event. Also present will be R&H, Inc. president Ted Chapin and Lawrence Maslon, author of The Sound of Music Companion. Broadway starlet Kate Baldwin will be on hand to sing the famed title song, and Mr. Bikel will reprise “Edelweiss.” The event starts at 5PM, and will be followed by a CD and book signing.