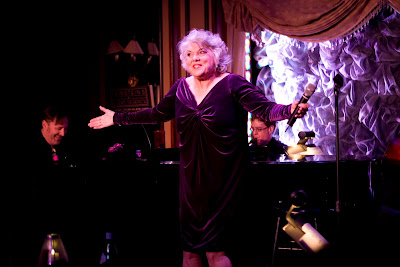 Early in her set at Feinstein’s at the Regency, Tyne Daly takes a moment to reflect on the puns that have been made on her name in various songs and quotes, etc. She insists there isn’t one she hasn’t heard – and dared the audience to try and stump her. She uses this moment as a thematic stepping stone for her latest cabaret act, “The Second Time Around” as the actress has been brought back to the venue by popular demand. It exemplifies her wit and somewhat quirky sense of humor and self. Ms. Daly then proceeds to offer a master class in lyric interpretation, imparting sincerity into every single word and phrase she speaks and sings.

I’ve known of Tyne for many years – my first exposure being, of all things, her role as Clint Eastwood’s partner in The Enforcer, the third of the Dirty Harry features. She is probably best known for her TV work, but she is also a Tony-winner for her performance as Rose in the 1989 revival of Gypsy. My first opportunity seeing Ms. Daly onstage was two months ago in the fantastic off-Broadway production of Love, Loss and What I Wore at the West Side Theatre. (It is here that I admit that unfortunately, no we are not related).

Daly, sophisticated and real, charming and genuine, winsome and wizened, starts her evening with “The Hostess with the Mostes'” from Irving Berlin’s Call Me Madam, a song she first sang at Encores! in 1995 with new lyrics specially written for the occasion (even a nod to the Berlin estate for having a sense of humor). She apologizes in advance for a missed lyric, or a note sung off-key. She needn’t have worried – the actress is so at ease in cabaret that if you’d think she’d been doing this sort of gig all her life. And while her voice is not quite her strongest asset as a performer, she sounds better here than I have ever heard her before.

The theme of the evening becomes time, as Ms. Daly uses her song set to explore her (and our) conceptions and obsessions with time – how one moment it can be suspended, then suddenly speed up. She ruminated on how life is in warp speed, and the events and incidents that can impact our lives (which makes for a lovely parallel with the concept behind Love Loss and What I Wore). One moment she’s reliving her high school dream to be a cheerleader, the next she’s wondering when her grandson got to be thirteen years old (and have his heart broken by Hannah in the 7th grade) and ruminating on heartbreak, joy, love, sorrow, etc.

While sitting at my table in Feinstein’s it dawned on me halfway through the performance that I had forgotten that there was anyone else in the room. On more than one occasion I felt as though Tyne was singing to me and me alone, heightening the intimacy of an already intimate venue, whose 10th anniversary she was also celebrating (“Where else in NY can you hear two Rudy Vallee songs in a row?” she deadpans).

The selections are eclectic, ranging from the popular to obscure. She sings popular standards, a cheer-leading rally, a devastatingly simple tribute to her mother with the 13th century folk ballad “O Waly, Waly.” She recalled her dream of being a cheerleader with a real obscurity – “Betty Co-Ed,” which contains “one of the worst puns in history.” She was exceptionally memorable with Bessie Smith’s blues classic “Send Me to the ‘Lectric Chair, a song juxtaposed with “That’s Him Over There” co-written by Marilyn Bergman.

For her grandson, she offers “Sonny Boy” combined with a fabulous rendition of Bill Withers’ classic “Ain’t No Sunshine.” She also paid homage to the “second girls,” those musical theatre sidekicks that get the laughs but not the guy. Her “Adelaide’s Lament” was a comic highlight; it’s the first time I’ve ever seen Adelaide portrayed as a real girl who happens to be ditzy – and not the comic cartoon that we’re used to. She also combined “Ooh, My Feet!” from The Most Happy Fella and “I Can Cook Too” from On the Town in dedication to the wait staff.

An example of her seamless segues, she talked about all the French references to food in the latter song, and it brought about her revelation that she has an imaginary friend (or rather alter ego), who dreams of being a French chanteuse a la Piaf. Tyne delivered – in flawless French – a stunning, understated rendition of the Hoagy Carmichael standard “Stardust’ which culminated in a piano solo with shades of Debussy by pianist John McDaniel (The Rosie O’Donnell Show).

But just when you thought she couldn’t take it further, she espouses her alter-ego’s desire to revive Jerry Herman’s Dear World, a short-lived musical adaptation of The Madwoman of Chaillot. Ms. Daly brings her cabaret to a shattering climax with a medley of “Each Tomorrow Morning/And I Was Beautiful” and “I Don’t Want to Know,” creating a carefully constructed and delineated character to the proceedings. If there are any risk-taking producers with chutzpah or the folks from Encores! out there reading this, you do not want to pass up that opportunity. The evening was capped off with her encore (Tyne saved herself a trip to and from the kitchen) of Sonny West’s “Oh Boy.” Probably best known from Buddy Holly’s upbeat cover, Tyne’s was slower, introspective and devastating.

Kudos to musical director and occasional harmonist John McD, who guided the band and supported the star with considerable poise. The orchestra, as Tyne loving called them, consisted of Tom Hubbard on bass, Ray Marchica on percussion, Rick Heckman on woodwinds and Peter Sachon on cello. I couldn’t imagine a better group or better arrangements to accompany the star. Tyne Daly is every inch a star, and she radiates the confidence and grace that comes from being one. But she is also a reflection of maternal dignity and warmth. The combination is a knockout.

“The Second Time Around” is playing at Feinstein’s until January 30. Her show runs Tuesday through Thursday at 8:30PM and Friday and Saturday evenings at 8:00PM with a second how at 11:00PM. There is a $60 cover ($75 premium seating) and a $40 food/drink minimum. Also, Feinstein’s is introducing a new policy with select seats going for a $40 cover no food/drink minimum (subject to availability).

3 thoughts on “Tyne Daly: "The Second Time Around"”