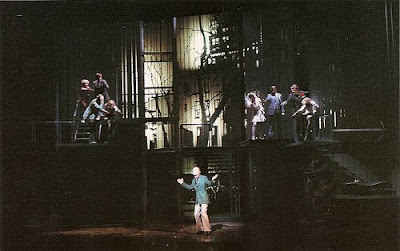 Tonight there is the latest in a long line of festivities celebrating the 80th birthday of composer-lyricist Stephen Sondheim at the City Center. It seems quite fitting to me as today is the anniversary of the musical that established Sondheim as the voice of new musical theatre: Company. On this day half a lifetime ago, his brittle, sophisticated portrait of marriage in NYC opened at the Alvin Theatre, dividing critics, surprising audiences and taking home awards left and right.

A series of vignettes based on plays by George Furth, the musical was directed by Harold Prince and starred Dean Jones as Bobby. What separated Company from other book musicals up to that point was its virtual lack of plot. The show was a series of vignettes – glimpses into Bobby’s lack of commitment and the relationship he has with other couples as well as his series of girlfriends. The setting and time? “New York City. Now.” Aside from that piece of information in the Playbill, there is no sense of chronology to what’s seen onstage. Characters step out of scenes to sing, commenting rather than continuing the action. It was daring, it was bold and it was pretty much unlike anything that had been seen up to that point.

Jones headlined the original production, but left after opening because of personal reasons (Larry Kert replaced him). The cast also included Charles Kimbrough, Beth Howland, Pamela Myers, Barbara Barrie, Susan Browning, Donna McKechnie and of course Elaine Stritch as Joanne. Boris Aronson’s set and Michael Bennett’s choreography are still often discussed in theatre circles; the show has been revived twice, including a Tony-winning turn in 2006 but none have come close to this production, whose original cast album remains the definitive reading of the score.

The songs of the score are well known to musical theatre fans. Bobby’s girlfriends singing “You Could Drive a Person Crazy” with its Andrews sisters style vocal arrangements; Marta’s “Another Hundred People,” Amy’s borderline insanity in the rapid fire patter song “Getting Married Today.” Bobby’s summation in “Being Alive” and Joanne’s condemnation of her peers and herself in “The Ladies who Lunch.” Jonathan Tunick charted the orchestrations, capturing the frenetic energy of 1970 in his superlative arrangements, foreshadowed in his work on Promises, Promises a couple years earlier (I think his charts for “Another Hundred People” captures the pace of NY better than any other I’ve heard).

It was the start of an unbelievably productive decade for Sondheim and Prince: Follies, A Little Night Music, Pacific Overtures, Sweeney Todd and Merrily We Roll Along (which is. Prince and Sondheim became the face of contemporary musical theatre. Jonathan Tunick, with chameleon brilliance, smartly orchestrated each one of these scores so thrillingly that any other charts pale in comparison.

In Sondheim on Sondheim, the composer has written a self-deprecating song called “God!” taking aim at his own revered position in the world of music theatre. But looking at Mr. Sondheim’s contribution to the art form from Company to the present, it’s hard not to agree with the people’s assessment.