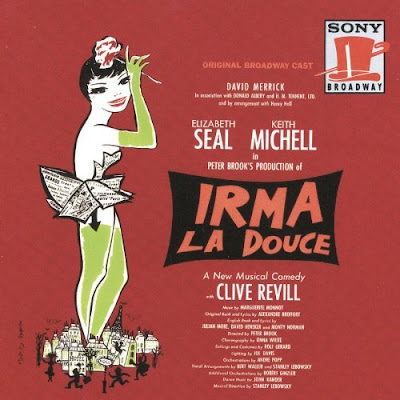 A couple of weeks back, I introduced myself to Billy Wilder’s film adaptation of Irma La Douce, starring Jack Lemmon and Shirley MacLaine. For the most part, it’s an amusing movie but it suffers due to its overlong running time. But more importantly, I started thinking about the original musical from which the film came. Irma, in a situation parallel to Harold Rome’s Fanny, had all of its musical numbers removed for its film version. The musical themes heard on the Broadway stage were adapted as underscoring (Andre Previn, who won the Oscar for it) and there was no singing and dancing, except an homage to the first act’s major showstopper “Dis-Donc, Dis-Donc” with MacLaine kicking up her heels on top of a pool table. 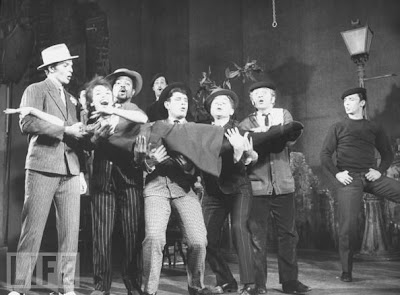 The show’s origins are unusual: it is the most successful musical comedy ever to originate in France. With music by Marguerite Monnot (Piaf’s best friend and favorite songwriter) and book and lyrics by Alexandre Breffort, Irma La Douce (which translated means “Irma the Sweet’) opened in Paris in 1956 to wide acclaim and popular success, running for four years. In a move that foreshadowed the journey of Les Mis some twenty-five years later, the show was optioned by British producers. 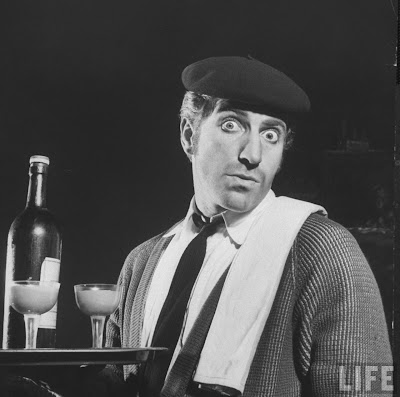 Plotwise, it was a rather innocent, albeit farcical adult fairy tale of a Parisian prostitute living near the Place Pigalle, who is the most popular girl on the block. A young law student (cop in the film) falls in love with her, becomes her pimp and is so jealous at the thought of other men being with her, he creates an alternate identity and becomes her sole customer. When Irma feelings for this new “customer” start to threaten the initial relationship, the pimp kills off the alter ego only to be sent to Devil’s Island for murder. And there’s also a baby. Oh, it’s ridiculous, but it’s ridiculous fun. With enough charm, the show works quite well. The score matches that sense of fun, with some dynamite musical numbers, especially for Irma who shines with “Dis-Donc” and the title song in the second act. 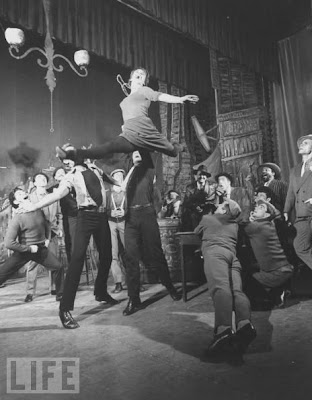 The English translation of the script and songs was done by Julian More, David Heneker and Monty Norman. Directed by the famed Peter Brook, the new version of the show opened at the Lyric Theatre in London where it was a tremendous success. The cast was led by Elizabeth Seal, who had previously scored a triumph as Gladys in the London company of The Pajama Game, Keith Michell as the lover and Clive Revill playing several roles, but is mainly the bartender and confidante to the lead characters (and also the show’s narrator). The show ran for 1,518 performances. 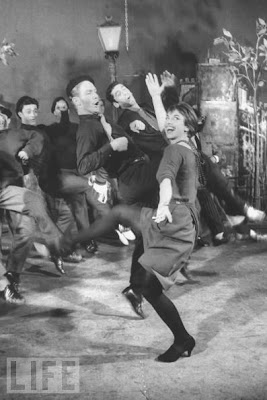 Then David Merrick got involved. Merrick is probably best known as the Abominable Showman for his ruthless (if admittedly effective) marketing schemes and especially for his blockbusters like Hello, Dolly! and 42nd Street. However, he was also known for importing London successes, including such diverse shows as Stop the World I Want to Get Off! and Marat/Sade, among many others. Irma La Douce was another of his imports.

The three London stars made the trip across the pond. Among the supporting cast were the perennial George S. Irving, a pre-Munsters Fred Gwynne, Elliot Gould and Stuart Damon. (Virginia Vestoff, later to find success in Man with a Load of Mischief and especially 1776, was Seal’s standby). New dance music was arranged by John Kander for Onna White’s choregraphy. Robert Ginzler supplemented Andre Popp’s orchestrations to accommodate changes made for the show’s NY berth. 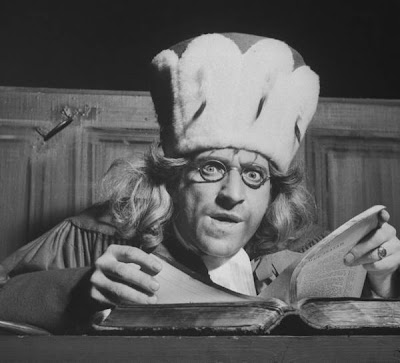 The show was a hit. Critics and audiences raved and the money poured out. Even before the show opened in NY, it was announced that Billy Wilder was to direct Jack Lemmon in the film version. Elizabeth Seal was the toast of Broadway, winning the show’s sole Tony Award for Best Actress in a Musical, besting Julie Andrews in Camelot, Carol Channing in Show Girl and Nancy Walker in Do Re Mi. (The show was nominated for six others). Irma closed after 524 performances, a solid respectable hit.

Michell later headlined productions of Man of La Mancha and La Cage Aux Folles and is familiar from his recurring role as Dennis Stanton on Murder She Wrote. Revill opened Oliver! on Broadway for Merrick, and later took on the title role in Sherry! He was also the voice of the Emperor in The Empire Strikes Back. However, Seal’s career never quite took off. She made one more appearance on Broadway in the Cicely Tyson revival of The Corn is Green. She’s done some BBC radio appearances, notably taking on Solange la Fitt in a concert of Follies. Her most recent film credit was a bit part in Lara Croft Tomb Raider in 2003. 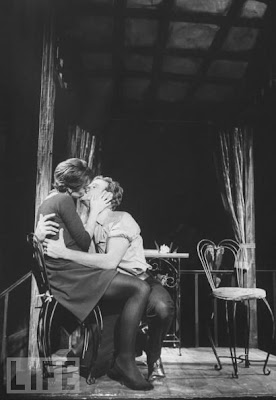 The musical itself held international appeal. Hookers with a heart of gold seem to be a popular draw in musical theatre and many international cast albums were recorded. However, the musical hasn’t received many major revivals. As it turns out there was some disagreement between the French and English estates involved with the property making professional English language productions almost impossible to pull off. But there is good news: I attended the first NY revival of the show was presented by Musicals Tonight in October ’08 which showed that Irma still has some life left in her. I can only hope that now we might see more productions of the show, perhaps at Encores! But then again it might be too small a show for the City Center: the cast is comparatively small and the show’s original orchestration is a producer’s dream: nine pieces (with some considerable prominence given to the xylophone).

There is a London release of the OLC through Sepia, and that particular recording is a slightly more intimate affair with more dialogue (including the entire “There is Only One Paris for That” musical sequence) but I have a greater affinity for the Broadway cast album, especially since it contains that sparkling, infectious overture – one of my absolute favorites. If you’ve never heard Irma La Douce, pick this one up, I don’t think you’ll be at all disappointed. The question now comes down to this: who could play Irma?

The pictures interspersed throughout the post are from the November 14, 1960 issue of Life Magazine entitled “Sweet Irma in a Wicked World.”