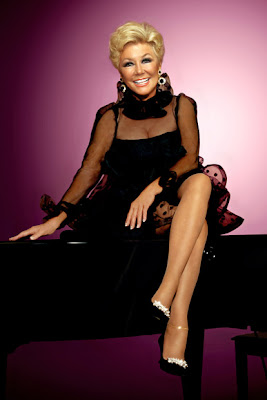 It’s hard to believe it, but before last night Mitzi Gaynor had never played New York City. I know, right? You’d think with Hollywood, TV, Vegas and countless tours and appearances under her belt, that she’d have taken the Big Apple by storm years ago. But it’s better late than never and Ms. Gaynor is conquering NY in an extended engagement at Feinstein’s at the Regency.

The ballroom at the Regency was packed as celebrities, friends and fans turned out in droves to see the star on her first night (including Mr. Feinstein, Chita Rivera, Polly Bergen, Paul Shaffer and Joy Behar). At about a quarter to nine, an old TV clip started playing as the crowd discovered that the CBS Saturday night lineup was going to pre-empted for a Mitzi special. Her band (four musicians with an unnecessary synthesizer) played a brief overture. Then, to the delight of all, Ms. Gaynor strutted out onstage in that trademark Nellie Forbush sailor suit. Once she gained composure she launched into that outfit’s complement: “Honey Bun.”

Mitzi Gaynor in South Pacific is something that reaches far back into my childhood. It was the second Rodgers and Hammerstein film musical I ever saw, and was noteworthy b/c it was the only other musical aside from The Sound of Music that my father liked. So whenever it was on TV, we would be watching. My appreciation also grew with There’s No Business Like Show Business where she danced with Donald O’Connor, belted with Merman and held her own against Marilyn Monroe. Then there was also Les Girls, an MGM film that paired her up with Gene Kelly and made her a foil for brilliant comedienne Kay Kendall. Anyway, when I was invited by Feinstein’s to come see the show, I RSVPed – more than three months ago.

The voice isn’t as full as it once was, but she is still a supreme entertainer and can communicate beautifully through the words and music. Once she smiles that megawatt smile of hers, the years melt away and you are left with the one and only, now and forever Mitzi. When Mitzi takes charge, she has a congenial affair with her audience; the sort of thing that most younger artists will never know. She’s a charmer, for sure; warm and genuine, but also sassy and self-deprecrating – with razor sharp wit and the ability to laugh first and laugh last. Plus, she’s still got a knock-out figure.

The entertainer is one of the last links to a bygone era of entertainment, someone who sang with the greats – Sinatra, Merman, Kelly, etc. Her material ranged from songs she made famous to amusing specialties, most notably an adapted “Show Off” from The Drowsy Chaperone, which involved Mitzi twirling boobie tassles, climbing on the piano and showing off those knockout gams. In between sets, she would go off to change into yet another eye-popping Bob Mackie gown. During the interim, video montages would play – highlights from her films, TV appearances and pop culture references. From the hilarious to the poignant, she showed everything – the film soubrette, the camp icon of the 60s & 70s, but also her favorite role: as Mrs. Jack Bean.

Mitzi is a singer and dancer, yes, but she is also one of the greatest storytellers I have ever heard in my life. Striking the perfect balance between elegant and bawdy, we were given a glimpse into her private life as a young starlet being romanced by Howard Hughes (who advised her to buy property – off the Vegas strip!), falling in love with the man who would become her husband and dearest companion, Jack Bean (the moment she fell? when he told her she was “full of shit”) and stories about working with the one and only Ethel Merman. She said that if she went into the whole story of how she got South Pacific and the experience making it, her show would turn into “Nicholas Nickerby, or whatever the heck it’s called.”

The biggest laughs came from the two Merman stories. Flying into NY for the premiere of Show Business, Merm (whom Mitzi called “Mom” – Merm called her “Mitzeleh”) invited her and her husband to dinner with the Duke and Duchess of Windsor at “Elmers” (El Morocco). She turned an anecdote about the simple act of putting on a cincher into comic art. Another story involved a chaotic evening at a Jersey casino, finding Merm and her pal Betty Bruce (who replaced Maria Karnilova in Gypsy) in the back seat of a Rolls Royce with a gallon of champagne.

Despite the presence of some pure camp and lowbrow humor, there were moments of unexpected vulnerability and openness. The termination of her film contract in 1954 and its devastating impact on her segued into a low-key, ruefully ironic reading of “There’s No Business Like Show Business,” transitioning into an upbeat number on the lyrical cue “But you go on.” She brought a moving silence to the crowd as she spoke and sang of her late husband, who died of pneumonia in 2006.

It’s not the most polished show I’ve seen at the Regency, but that’s a moot point. You’re going for Mitzi and you get a helluva lot of Mitzi. Now that’s what I consider getting your money’s worth.

Following her encore, “You Are the Sunshine of My Life,” a young lady got up onstage, much to our surprise. She was there representing the NY area Emmy Awards. As it turns out, Gaynor’s PBS special won last month but since the star was on tour with her show she couldn’t be in attendance. The overwhelmed Mitzi gave a gracious acceptance speech, bringing the crowd once again to its feet for a final standing ovation. 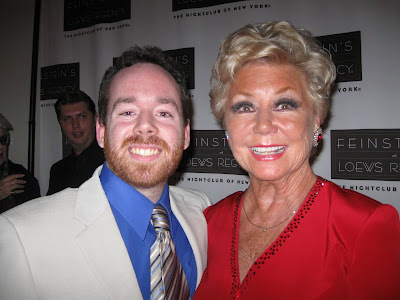 Since it was opening night, there was a champagne reception in the ballroom foyer following the performance. SarahB and I were quite fortunate to chat with Mitzi for a couple minutes. The star was ever so grateful and gracious, and it was a thrill for all of us in that room last night to be there for such a star. The next morning, my parents were both curious to know about the evening, and I showed them the picture above. It marks the first time in all my years of going out to theatre and solo shows that my parents have ever been jealous. I think Mitzeleh would get a kick knowing that the first thing my mother did was to call the neighbors letting them know she’s in town.

Mitzi’s playing Feinstein’s (remember, the ballroom!) until May 29. Don’t miss this show, whatever you do.