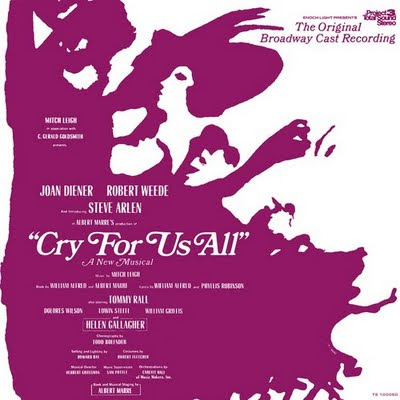 All throughout the year, Bruce Kimmel at Kritzerland records has been releasing cast albums on CD for the first time. He got the ball rolling with Anya, and has continued with Illya Darling, Show Girl and the 1968 off-Broadway revival of House of Flowers. Now he is releasing the 1970 flop Cry for Us All, which when you consider the show’s troubled tryout and fast failure, sounds more like a plea from the cast than the show’s title.

The musical is based on the hit 1965 off-Broadway play Hogan’s Goat, written by William Alfred. The original play is a tragic melodrama written in blank verse about a young, ambitious Irish immigrant who wants to run against the corrupt incumbent Brooklyn mayor. (The play and musical are set in 1890, before Brooklyn was incorporated into New York City). The hero’s secrets and demons come back to haunt him, destroying his life and his marriage. His dying mistress, and his civil marriage are cause for political scandal, ultimately culminating in his wife dying after he pushes her down a massive staircase. A real crowd-pleaser.

Mitch Leigh decided that the property should be a musical. Leigh, who had a successful career in advertising, was most famous for the music to Man of La Mancha and the popular jingle “Nobody Doesn’t Like Sara Lee.” All of his other theatrical ventures were failures (and all lacked a good lyricist). La Mancha director Albert Marre was brought in on the project and he co-wrote the libretto with Alfred (who was also co-lyricist with Phyllis Robinson). However, along with Marre came Mrs. Marre, stage diva Joan Diener.

Joan Diener is a musical theatre eccentricity. Trained in opera, she found her greatest successes – and failures – in the American musical theatre. Working exclusively with Marre, she only had two hit shows, Kismet (for which she won a Theatre World Award) and Man of La Mancha, in a role she latched onto as if she were the Pope. As Lalume in Kismet, the voluptuous Diener was scantily clad as an exotic temptress who tore the roof off the theatre with “Not Since Nineveh,” where she first made an impression with her unusual voice which combined a mezzo-belt and operatic soprano, which she navigated seamlessly if recklessly.

She recreated Kismet in London and in later revivals. As Aldonza, she performed in the original Broadway cast, the original London cast, the original Paris cast (in French, translated by and starring Jacques Brel), the national tour, the 1972 Broadway revival and a replacement in the 1992 flop revival when the score proved to be too much for Sheena Easton. Diener is at her best on the original cast album, where she sings with great flair and energy. Starting in London (if not before), she started slowing down the tempos for all her numbers, turning them all into dramatic soprano arias. Her “It’s All the Same” in the ’72 Vivian Beaumont revival was especially lugubrious. I can’t help but wonder if this was in a bid for more stage time.

She also starred in the out of town failure At the Grand which thirty years later showed up on Broadway (and wholly revised) as Grand Hotel. Cry for Us All was meant to capitalize on the La Mancha success and lasted a week. Her final original musical role was as Penelope opposite Yul Brynner’s Odysseus in the one performance wonder Home Sweet Homer, which was based on and toured for a year under the title Odyssey. If Diener had a large voice, her acting style was even larger. Her character choices were broad and often bombastic, and entirely wrong for the character she was playing here. In talking about Cry for Us All in his book One More Kiss, Ethan Mordden says Diener “played the lead role as An Evening with Joan Diener.“

It is Diener’s miscasting in the role of the delicate Irish wife, Kathleen, that is seen as the show’s first step on the rode to failure. Robert Weede, the virile baritone of The Most Happy Fella and Milk and Honey was brought in to play the Mayor. John Reardon was hired to play the hero, but quit during early rehearsals when Steve Arlen took over. Rounding out the leads in what were supposed to be comic relief roles were Tommy Rall and Helen Gallagher.

Out of town is where the trouble really started. Audiences in New Haven found the leading couple rather unsympathetic and drastic measures were taken to make them more likable. What that meant was that material was taken away from Rall, Gallagher and Dolores Wilson and given to Diener, whose part was starting to become much larger than it needed to be dramatically. A crucial role from the play was written out entirely and things got out of control. Other cast member’s were not thrilled with what was perceived to be Diener’s hijacking of the show, and resented losing their material to her.

In Boston they retitled the show Who to Love before reverting back to the original. Audiences there seemed to like the show, with some numbers even stopping the show. However, problems with illness, on set accidents and problems with the set were abundant. The set consisted of a three story house on a turntable which moved around to transport the action. The motor caused the set to constantly hum, and at one performance an 1800 pound tree fell into the wings (surprisingly no one was hurt). The show came into New York in April 1970, as a two hour, one-act lumbering bore.

The source material was so intensely melodramatic that it most likely should have been an opera instead of a Broadway musical. The score was the best thing going for the show. The stilted lyrics range from mediocre to appallingly bad, but the music was often quite extraordinary. The title song is somber but stirring, “This Cornucopian Land” is a fascinating eleven o’clock number, and ironically enough Diener lands the best number of the entire score in “The Verandah Waltz.” The three street urchins who function as a Greek chorus have several interesting items. Plus, it’s got a spectacular overture.

However, there are the duds. Rall sings a variation of the ribald “Leg of the Duck” song (with lyrics such as “I gave it to Amy, she said it’s too gamey”) and Gallagher sings that perennial favorite “Swing Your Bag” (according to Mordden, Diener jumped in on the last three notes culminating in a D above C – something not present on the album). However, there are too many numbers that are reminiscent of or that retread Man of La Mancha: “The End of My Race,” the overly dramatic “Who to Love If Not a Stranger?” and “That Slavery is Love” for Diener. There is also the finale where a priest sings the “De profundis” in Latin as Diener emotes a death scene.

The musical opened at the Broadhurst Theatre and was eviscerated by critics, closing one week later after 9 performances. The cast album, a favorite of collectors, has long languished on LP, but thanks to Mr. Kimmel it’s been released in a limited release of 1,000 copies. So for the curious, you’d better get your copy while you can.