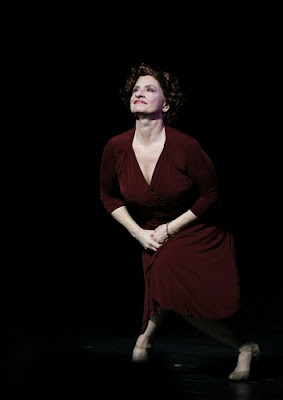 Roxie and I are heading in to take in the final performance of the acclaimed revival of Gypsy. Anyone within a ten block radius of the St. James Theatre should brace themselves for this earth-shattering last Turn.

However, the NYC shenanigans start at a pre-show brunch with Steve and Doug, Sarah and friends (who were at the penultimate performance of Gypsy, forever to be known as the one where Patti tossed out the photographer), Jimmy and Kari (who will also be in the house with us).

she almost swallowed the orchestra whole…

Oh you know the one I mean. Where crazed patrons choke one another. Where vents fall from the ceiling and light bulbs explode. Oh, and curtains come down on Laura Benanti. Yes. It’s the latest revival of Gypsy. It’s a little strange for me since it’s the first time I’ve seen a second production of a show on Broadway (especially in so short a lapse between). Bernadette Peters. Remember her? Well, anyway, Gypsy is welcome back on the Rialto anytime, as far as I’m concerned. And tonight was one of those electric nights where everything aligned for that certain 5’2″ bundle of dynamite, Ms. Patti LuPone in what early ads were referring to “the role she was born to play.” They were not wrong.

Taking the early mold of her previous experiences with the musical, both at the Ravinia Festival in ’06 (the start of the journey that culminates in her opening last night) and the City Center presentation last summer, LuPone has refined her character with the precision of a diamond cutter. Rose is a determined mother of two very lovely young girls that she thrusts into the throes of show business in an effort to assuage her own unfulfilled ambitions. It just screams musical comedy, no? Well, anyway. It’s genius. The score. The orchestrations (and that overture. yowza!) The book. It’s almost fool-proof (so why did you tamper with it, Mr. Laurents?) You follow through Rose, the character as she goes from unmitigated determination (“Some People”) through desperation when she uses Louise in an effort to mask her emotional scarring and fear of failure (“Everything’s Coming Up Roses”) through her eventual breakdown when confronted with the reality that both show business and daughters have passed her by (her defeat: “Rose’s Turn”). Might I add, Patti’s diction was almost too perfect (not a problem, just an observation) and her vocals were the best I’ve ever heard live. Just for the record.

From Mr. Brantley, who was decidedly mixed this summer:

“When Ms. LuPone delivers “Rose’s Turn,” she’s building a bridge for an audience to walk right into one woman’s nervous breakdown. There is no separation at all between song and character, which is what happens in those uncommon moments when musicals reach upward to achieve their ideal reasons to be. This Gypsy spends much of its time in such intoxicating air.”

Nuance, chemistry and impressively layered acting abounds. From Patti. From Laura. From Boyd. From Leigh Ann. From Nemora. From Alison. From Tony. All of whom are superlative in their roles. (For my money, Laura, Boyd and Tony are definitive in theirs). As for the ending, I’m not really sure what I think. I guess if you tamper with what has been for years, you’re bound to notice. But on the flip side, the staging of the new ending is a bit more naturalistic and honed into the unresolved rift between mother and daughters. It’s not really going to make or break the experience. That happened five minutes before.

Did I mention, it was opening night? Yep. Noah and I sat in the balcony behind a deluded crone and her rude mother. One insisted on leaning forward the entire show and the other chimed in with an extensive crinkling of a candy wrapper, for literally the entire show; except when she leaned forward. That group clearly had no idea what was going on and looked out of water when the crowd continually went to pieces, especially the overwhelming standing ovation received at the end of the “Turn.” Thankfully it didn’t detract too much from the overall experience. Kari and Sarah were also among the first nighters reveling in what was a thrilling experience. Post show, we had dinner at Angus McIndoe’s. As Kari and I sat waiting like wallflowers for Noah and Sarah while they kibbitzed, I spotted none other than Mr. Stephen Sondheim at the bar. Kari and I immediately made our way over; not to speak with him make no mistake, but to sit near at the bar like the total theatre geeks we became in about, oh I don’t know, 3 seconds. (Kari surreptitiously snapped a photo with her iphone – and no one was the wiser. And she was literally trembling from her proximity to musical theatre’s living deity). Dinner was fantastic. The booze was fantastic – and I drank almost half a bottle of water – not a Poland Spring or Fiji, no I guzzled one the size of a large merlot bottle – as we made our way out. Pity it wasn’t vodka or gin. I might have had another act to my evening.

Those sighted: Angela Lansbury, Mandy Patinkin, Laura Linney (flawless with little to no makeup), Martha Plimpton, Corky from Life Goes On, Thomas Meehan, John Weidman. Others I probably had no clue were in the house. They even had a red carpet and an official opening night sticker on the playbill.

Oh, and after her curtain call, Patti LuPone lay fully prostrate onstage to her cast. It was that kind of event. Stephen Sondheim and Arthur Laurents got their props. And Sondheim gave a shout out to the late Jule Styne. (Class act). Though it appears Laurents gave Patti notes as they exited the stage…

Hey guys. Gypsy is back on Broadway. What the hell are you doing reading my blog? GET TICKETS AND GO NOW!!!! “…and there’s no stopping us this time!”

A glimpse at the star trio for the upcoming April issue of Vanity Fair.