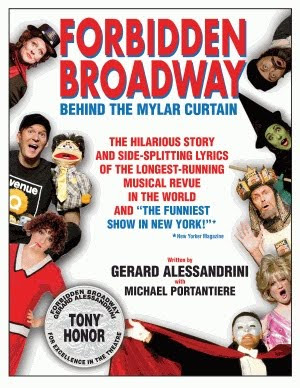 Whether tackling a mega musical or a mega ego, Forbidden Broadway has been a staple of the Broadway scene for almost three decades. The small off-Broadway revue has thrived on poking fun at NY theatre with their inventive costumes, wittily knowing lyrics and this general sense of tongue-in-cheek fun. While the show has closed up shop (for now) earlier this year, its legacy continues with the release of the new book Forbidden Broadway: Behind the Mylar Curtain by FB’s creator Gerard Alessandrini, assisted by Michael Portantiere. Together, they have assembled this coffee table sized book which details the history of the franchise, offering brief analysis and selections from some of the parody lyrics and scenes he has written over the years.

It’s most fascinating to look back at the show’s humble origins. Alessandrini was a waiter and maitre d’ at Avery Fisher Hall in the early 80s while Richard Burton was reviving Camelot at Lincoln Center. From word of mouth on how drunk the actor was onstage (and off), he wrote “I Wonder What the King is Drinking Tonight.” With his friends Nora Maye Lyng and pianist Pete Blue, the show was first performed at open mic night at Palsson’s in 1981. It gradually grew into a steadier gig, with four actors, a piano and that mylar curtain. Alessandrini also relays how a ruthless evisceration of Lauren Bacall in Woman of the Year (“I’m One of the Girls Who Sings Like a Boy”) brought the show to the attention of Rex Reed, and by extension the entire NY theatre community. Alessandrini is at his best when discussing the early history of the show. He does offer some running commentary throughout the book, but he doesn’t nearly go as in depth as one would like.

More interesting than his recollections is the opportunity to see his lyrics in print. There have been enough lyrics, updates and revisions to warrant a two-volume tome, but here you get the best of the best. It’s especially nice to see some of those that were never recorded (i.e. Woman of the Year). As someone who grew up on the recordings alone, it’s interesting to note that the lyrics in print do not necessarily correlate with those on disc. (I’m also grateful that three of my favorite parodies are reprinted here: “I Couldn’t Hit the Note,” “Super-Frantic-Hyperactive-Self-Indulgent-Mandy,” and one of the most brilliant, “Gagtime.”) However, the some of the interesting contributions to the book come from FB alumni, including Broadway staples Ron Bohmer, Dan Reichard, Brad Oscar, Barbara Walsh, Dee Hoty, Bryan Batt and Christine Pedi. These actors offer their perspective and fond memories of what it was like to be involved with the show and to work with Alessandrini.

There are a great deal of pictures throughout, most notably in a tribute to the late Alvin Colt, the Broadway costume designer whose visual gags were sometimes just as funny, if not funnier than the parody at hand. There’s also a Hall of Fame of sorts showing the various celebrities who had come to see the show over the years (who knew Myrna Loy was a fan?) However, not all is perfect. There is a major issue I have with the book and one that makes me feel a little bit too much like a cranky old schoolmarm. But there are copious amounts of typographical errors, both in the commentary and in the lyrics. I stopped counting well into the double digits; it proved to be an overwhelming distraction for me as I read. For a book that retails at $24.99, I just think there should be some consideration given to proofreading by the publishing house.