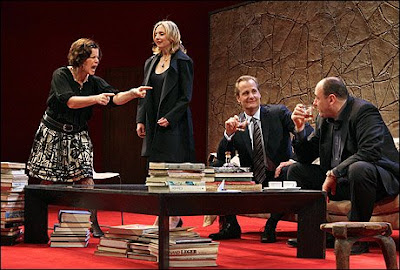 The road to hell is paved with good intentions. And it’s never been more hilarious than it is here in God of Carnage, the most exhilarating new play I’ve seen in New York since August: Osage County.

When Veronica and Michael invite Alan and Annette over to their moderately upscale Brooklyn apartment on an ordinary weekday afternoon to discuss a playground altercation between their sons, good intent is first and foremost. The situation is civil, yet strained as they seek out to smooth out the rough edges: Alan and Annette’s (Jeff Daniels and Hope Davis) son hit Veronica and Michael’s (Marcia Gay Harden and James Gandolfini) son in the mouth with a stick, knocking out two incisors and causing some serious damage. Veronica’s insistence that Alan and Annette’s son make a meaningful apology to their son starts to unravel the forced placidity. Tensions mount and eventually explode in ways both metaphoric and literal.

God of Carnage is one of those incisive, cutting plays that gleefully exposes the narrow line between the civilized and primitive in human nature . The play by Yazmina Reza (translated into English by Christopher Hampton, her frequent English language collaborator) had a highly successful Olivier-winning run in London’s West End starring Ralph Fiennes and Janet McTeer, directed by Matthew Warchus. That production has transferred to New York for a limited engagement, relocating the setting to the Cobble Hill section of Brooklyn and Americanizing the text.

The four cast members, all of whom were nominated for Tonys (all as leads, I might add) carry the evening off with remarkably astute characterizations. Jeff Daniels is amusingly droll as a work-obsessed attorney whose main concerns lie with a major pharmaceutical case than with his family. Hope Davis is hilarious as his anxiety ridden wife whose nausea coincides with her husbands convenient habit of answering all cell phone calls. James Gandolfini plays the other father, more blue collar sort of man’s man who also happens to have a mortal fear of hamsters. The evening; however, belongs to Marcia Gay Harden, the mild-mannered, cultured, liberal “concerned parent” and author (she’s written a book on Darfur) who melts down to primordial chaos by the play’s end. At the play’s end the living room is a shambles, as are the individuals onstage who have had their hypocrisies tossed at them (some literally). As arguments and accusations are tossed, allegiances shift with the fluidity of a roving cumulus cloud. One minute it’s couple vs. couple, the next, the women vs. the men and on occasion three gang up on one. With each polemic shift, the play’s characters and their situations only become more complex, and as a result more hilarious.

It’s hard not to think of Who’s Afraid of Virginia Woolf? while watching a four-hander about bickering couples. However, this play is half the length and the social lubricants only make their grand debut about halfway through the play. Warchus, who directed last year’s first-rate revival of a third-rate farce (Boeing Boeing), once again manages to bring out unexpected humor and nuance in situations that are routinely formulaic. The characters become childlike, throwing tantrums, hurling insults, dropping truth bombs and causing more harm than the instigating incident on the playground. (Warchus also directed the limited engagement revival of Alan Ayckbourn’s The Norman Conquests, playing in rep at the Circle in the Square… we’ll have more on that one in the near future). The play gets off to a strained start, and rightly so: it’s awkward to watch a person trying to parent another person’s children. The tensions build and build, and about twenty minutes into the play, Hope Davis vomits all over Harden’s priceless art books pushing the characters and the audience past the point of no return. At this point all bets are off, and to paraphrase Margo Channing, “Fasten your seatbelts, it’s going to be a bumpy afternoon.”

The production has wasted no time in touting its nominations, with signs already erected on the marquee. One of them reads: “Nominated for 6 Tonys, including the ENTIRE CAST.” All four actors have earned the nominations and deservedly so, though I have to say Harden as Veronica is the standout among a cast of winners (and at this point is my pick for the Tony award on June 7). I also want to add: this is the first time any of the four actors have appeared on Broadway in over a decade, and I’ve got to say, it’s good to have them back.

The show is currently running in a limited engagement at the Jacobs Theatre until August 2. Run, don’t walk.