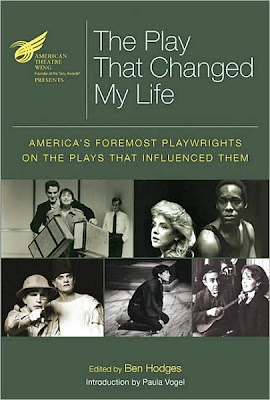 What was the play that changed your life? That’s what the American Theatre Wing asked several contemporary playwrights for its upcoming release of The Play That Changed My Life: America’s Foremost Playwrights on the Plays that Influence Them, which takes a look at that moment in these artist’s lives that turned them on to the theatre. Nineteen playwrights have contributed to the book, which will be released by Applause books this December. The choices may surprise you, as it covers the gamut of David Henry Hwang seeing Equus in San Francisco, to young Edward Albee seeing Jimmy Durante and the star elephant in Rodgers and Hart’s Jumbo at the Hippodrome in 1935 (I personally love the randomness of that one – it just goes to show you never know what sort of theatre experience will be the one that propels a person’s life). The project was the brainchild of the Wing’s Executive Director Howard Sherman and is edited by Ben Hodges (Theatre World), with an introduction by Paula Vogel. I can only hope that this will be the first in a series of volumes (actors, composers/lyricists, directors, designers, producers, etc).

However, The American Theatre Wing is curious to know the play that changed your life. They have announced an online essay contest in conjunction with the book’s release:

“What show had the greatest impact upon you, when you saw it in the course of your life, and most importantly why it meant so much to you. Entries (limited to 350 words) will be judged based on their creativity, their clarity and perhaps most importantly, for how they convey your passion for the theatre.”

So tell ATW about the play that changed your life – those few hours in the theatre, at any age, in any theatre, that had the greatest impact on your life and your perception of theatre — and have the opportunity to share your story with the thousands of visitors to the American Theatre Wing’s website while getting the chance to win an autographed copy of The Play That Changed My Life and other theatrical books from Applause Publishing.

The contest entry period is from Monday, November 2nd until Sunday, November 29th. To enter, visit the American Theatre Wing online. The final expert panel judging the contest includes ATW Board of Directors Chairman and President of the Rodgers & Hammerstein Organization, Ted Chapin; Applause Books’ Editorial Director Carol Flannery; award-winning playwright David Henry Hwang; and former Time Magazine arts editor and divine theatre blogger, Janice Simpson. Additional prizes will be given based on voting by the general public, which will continue through December 11.

In the meanwhile, here’s what two Tony-nominated leading ladies had to say about the theatre experience that forever changed their lives:

‘I think it was in a strange way kind of a natural progression, you know? My mother was an actress, everyone in our lives were in show business, I grew up in the theatre world in New York, my mother was in the original company of Hair. So it just kind of came naturally, it just kind of evolved. And by the time I was eight years old it was already sort of a foregone conclusion. If we weren’t in the theatre – we went to the theatre constantly. So it just seemed like a normal thing to do with your life. It didn’t seem odd or different or strange or far away at all. I think in the early years of the Park, the Delacorte, there were things that we saw there that made me just sort of mesmerized. I couldn’t tell you the first one, but I do remember seeing Raul Julia in Threepenny Opera at Lincoln Center and thinking, “That’s cool.” And then when I was a little older, I guess about sixteen or seventeen, I saw John Malkovich in Burn This. And that was a performance that made me feel like that was a perfectly legitimate thing to want to be an actor — almost even respectable, possibly.’

‘There’s one that comes to mind right now, which for some reason always does, even though there have been many plays I’ve seen that have had a powerful impact on me: my mother took me to see Miss Margarida’s Way with Estelle Parsons and I just remember being blown away by that, by her performance. I was confused by it; I was like, “Is she a real teacher?” I was just giddy with that play and I’ve always sort of had a secret desire to do it, even though I probably wouldn’t be right for it. I just remember that having a big impact on me. I thought it was really fun — I was shocked by it and I think I was just young enough that I just thought she was a crazy woman up on stage and that kind of intrigued me, and I loved that play’