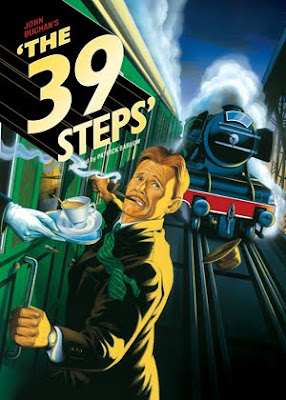 When I first saw the delightful production of The 39 Steps at the American Airlines Theatre, I don’t think I could have anticipated that it would have run for two years. But it was the little play that could, and one of the rare plays to transfer not once, but twice. The show closes in January, but I decided that I should check in one last time before it goes.

Of the original cast members, only Arnie Burton remains. Sean Mahon (The Seafarer), Jill Paice (Curtains) and Jeffrey Kuhn (Assassins) have assumed the other roles. The show is still bright and vibrant, scoring many of the laughs. My enjoyment the first time I saw it was tempered by the fact that I was in a house with a great many Hitchcock-philes. This time around, there weren’t as many but it still managed to crack myself up, along with my show people SarahB and Byrne.

The play is still a mastery of theatrical invention and cleverness. Slyly self-aware, the evening moves at a rapid pace as memorable moments from Hitchcock’s original film are recalled, with nods and winks at many of the famed director’s other works. It’s still a jaw-dropping marvel watching Man #1 and Man #2 (Kuhn and Burton) switch off between about hundred roles throughout the evening, as they switch off hats or wigs, dresses for trench coats with razor-sharp precision and flawless timing. While not the doppelganger for Robert Donat that the role’s originator Charles Edwards was, Mahon brings charisma and bemusing wit as Richard Hannay, the “wrong man” at the center of the story. Paice is a pleasure to watch as his three leading ladies, with an especially hilarious over-the-top Scottish brogue.

The highlight remains the recreation of the chase on the Scottish moors, presented as a shadow puppet display. In a post show talk back we found out that that was a favorite moment for everyone in the show, as it is the moment involving the entire cast and crew. There’s even the Hitchcock cameo. These and every other moments are so innately clever and imaginative that during the moments you’re not laughing out loud, you’re grinning from ear to ear. Watching Kuhn and Burton re-enact the hotel lobby scene still blows my mind.

My one issue with the show remains: it would work better without an intermission. Granted, I’m sure the actors can use the 15 minutes to catch their breath and regroup for the second half, but it would just add to the flow of the evening if it kept going in one shot. The show’s final performance at the Helen Hayes Theatre is on January 10, 2010 after 771 performances, making it the longest-running non-musical play in seven years.

Before the Oscars last Sunday, I jetted down to the city to take in the matinee of The 39 Steps as part of my Roundabout subscription. I should preface anything I have to say with the following: I am an enormous fan of Alfred Hitchcock. In fact, it’s easier for me to list his films I haven’t seen: Topaz, Marnie, Under Capricorn, The Paradine Case, Spellbound and Jamaica Inn. Don’t worry – I plan on getting to them in the near future. There are many of his films I love and only a couple that I dislike (Torn Curtain is my least favorite; even though as is the case with any lesser Hitchcock, there’s always something to be appreciated). I have been obsessed with him ever since I first caught a glimpse of the shower scene when I was 7 and it scared the bejesus out of me – imagine my horror when I was told only a few minutes later it was time to shower and get ready for bed. I’ve devoured his films, read a lot about them and just enjoy them on many levels. (And a lot of them are surprisingly hilarious. Take for instance Mr. & Mrs. Smith with Carole Lombard in Hitch’s sole screwball comedy; he uses his trademark styles to heighten the comedy and with hilarious results). I can only assume that the more you know Hitchcock, the more you’ll enjoy The 39 Steps.

Anyway, the film is one of Hitchcock’s early classics, released in 1935. I won’t give away much of the plot, as it’s a film that should be seen to be fully appreciated. Robert Donat stars as Richard Hannay, who is an early prototype for Hitchcock’s trademark “wrong man” protagonist. Anyway, there’s a murder; he’s wrongly implicated and gets involved in an espionage plot as he and only he can try and stop the agents from fleeing the country with valuable information. All the while, he is being chased from London into Scotland by the police. Episodic and plot-driven, the film is a tour-de-force for Donat, who is supported by Madeleine Carroll (the first Hitchcock blonde…?) and the always perfect Peggy Ashcroft in a small but crucial role as a Scottish housewife. There are twists and turns and chases across the moors; great one-liners from Donat and one of the sexiest scenes to get by the censors when he and Carroll are handcuffed together (whether or not you see the play or film, you’ll know the one I mean).

“I long for something mindless and trivial. Something utterly pointless…I know! I’ll go to the theater!!”

So Mr. Hannay decides in his opening monologue. You already know that this fateful decision is going to incite a slew of mystery and intrigue. But who knew slapstick comedy was going to be a part of the equation? This stage adaptation opened in London last season, winning the Olivier for Best New Comedy. In an incredible feat of unending creativity, the film is recreated onstage. The catch? There are four actors: one playing Hannay (the spot-on Charles Edwards, who originated the part in London; the lone actress (Jennifer Ferrin) playing the three pivotal female roles and two actors (Arnie Burton and Cliff Saunders) playing EVERYONE ELSE, in a feat that is so audacious and clever, there aren’t enough superlatives to praise the actor’s hard work.

For a film that is as much a travelogue of Scotland as well as thriller, its staging is devilish fun. The proceedings keep things to a minimum with a lot of fun theatrical tricks and clever use of minimalist scenery (and props) to recreate large panoramic scenes (like the Moor chase) and even the uncanny and hilarious ability to recreate the many crowd scenes in the film (the moment where Hannay joins a parade to escape the police brought down the house). The show uses the wit of the screenplay to their best advantage, adding indelible low-comedy that will leave you breathless from excessive laughter. Watch Burton and Saunders as they portray about five characters having separate exchanges all at the same time. My favorite was their recreation of the famed hotel scene where the spies encounter the proprietor and wife. Nothing short of genius on their part.

There are also musical and textual references to other Hitchcock films, many of the music cues getting huge applause and a lot of strangely enjoyable groan-inducing puns (the music hall and vaudeville tradition put to use was welcomed wholeheartedly by the audience). The play flies by; each act is 45 minutes and is a decidedly engaging mix of absurdist parody and low-brow comedy. (Think of say, Airplane! as opposed to Spy Hard). My only qualm to the powers that be – it would be even better if the show ran without an intermission. You don’t have to have seen the film to enjoy the play, but what the hell, it enhances one’s appreciation for Mr. Hitchcock and I still find it quite good 73 years removed. It’s worth of the price of admission alone to see the two supporting actors do their thing; I’m still reeling from their performances.

Oh, and for the curious, Mr. Hitchcock has a cameo. I won’t tell you where or how, but it too stopped the show.

Before I sign off for the night, just wanted to wish the ever-youthful and ever-beautiful Bernadette Peters a happy 60th birthday. That is not a misprint. The beloved diva is reaching her milestone birthday looking nowhere near her age. Hopefully you all put on your favorite BP album (what did you listen to, I’m curious? I listened to Sunday in the Park With George) and take a glass to celebrate. This raises an important question: when is Bernadette coming back to Broadway and in what star vehicle? (Whatever the answer, it’s not soon enough).

Today was an eventful day. I worked for 8 1/2 hours; drank a lot of green tea and bought a laser printer (thank God for 50% sales), 1500 pages of blank paper, binders and sheet protectors for my latest project; organizing my vocal scores. My first effort was for the score of 1600 Pennylvania Avenue (from the Philadelphia tryout). Now all I need is a piano… The much-loved (by me) “Duet for One” is a whopping 26 pages long. The Bernstein estate will not permit the original Broadway version of the show to be presented; the Cantata is a concertized revisal which eliminates a great deal of the book with some revision among the musical numbers, dropping the original’s “Rehearse” and reinstating the endless “Monroviad.” (Bernstein was so disappointed with the show as it played in NY in 1976, he refused to allow the cast album to be recorded, can you believe that? ARGGH!). Speaking of which, the Collegiate Chorale is giving the Cantata its New York premiere on March 31 at Frederick P. Rose Hall, Jazz at Lincoln Center (what a curious name for a venue). I really, really want to go. Baritone Dwayne Croft and soprano Emily Pulley will be singing the roles of the President and First Lady. Anyone else interested? The top tickets are $85, but I plan on aiming a bit lower ($65, 55, 45, 35, 20).

Broadway-wise: I’ve got my season ticket to The 39 Steps on February 24th. I will not be lingering in the city that night, since it’s supposed to be Oscar night (oh please, God). Also, I will be attending the March 12th matinee of Cat on a Hot Tin Roof at the Broadhurst. It’s going to be exciting as it will mark the first time I’ve seen James Earl Jones or Phylicia Rashad live in performance. I’m seeing Sunday again as a subscriber on March 9th. But first? Applause this Sunday at the City Center. Hearing how the flu has caused her to miss rehearsal and to lose her singing voice, I hope Christine Ebersole’s health will be much improved by then. This, among all the other festivities is going to make for one hell of an exciting spring season of New York theatre.

PS – My script of August: Osage County arrived in the mail today (along with Auntie Mame, Mister Roberts and Who’s Afraid of Virginia Woolf?). Huzzah!