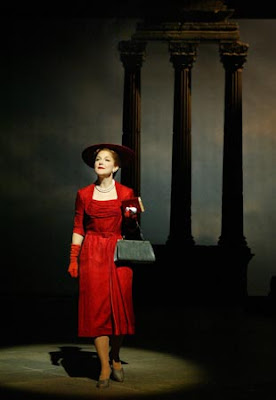 On this day three years ago I attended my first-ever Broadway opening night. It was also the night I fell madly in love with a new musical; a feeling that I had never experienced before nor since. The show: The Light in the Piazza.

It was an interesting progression for me. I was familiar with the film adaptation of Elizabeth Spencer’s original novella when it played on TCM a few years before. It starred Olivia de Havilland and Yvette Mimieux, respectively, as the mother and her daughter on vacation in Florence, Italy. George Hamilton was Fabrizio, who came off lecherous rather than romantic – to the point where I was actually disappointed the two got together. Rossano Brazzi was his father. It wasn’t a spectacular film, but it featured a stellar performance from de Havilland and beautiful CinemaScope cinematography (shot on location).

Anyway, as I heard this was being adapted as a stage musical, I was instantly intrigued at the prospect. I’d never really heard Adam Guettel before. I knew about Floyd Collins and that he was Richard Rodgers’ grandson, but that was it. I vaguely followed the musical while it was out of town, my interest piqued because I had recently seen Victoria Clark in performance for the first time in the Broadway production of Urinetown, in which she briefly assumed the role of Penelope Pennywise. Hearing her knock “It’s a Privilege to Pee” out of the ballpark remains one of my favorite discoveries of a talent ever. The song is mostly high belting, but it culminates in an operatic high C. From my vantage point mid mezzanine at the old Henry Miller’s I could hear her acoustic sound. Needless to say, I was very impressed.

When time came for the show to come into New York, I very calmly yet honestly told everyone it was the musical I was looking forward to the most. The out of town reviews were mixed to positive, but it was a work in progress so I expected continued work. Vicki earned raves for her characterization of Margaret Johnson and was supported by Celia Keenan-Bolger as her daughter, initially in Seattle at the Intiman (where Sher is artistic director) and in Chicago at the Goodman.

It was Lincoln Center Theatre who brought the musical to Broadway as part of their 2005 season. Noah went to a preview and called raving about and I knew that we were onto something special here. I followed his lead and joined the student ticketing program on the Lincoln Center website and proceeded to look for my $20 seat. When performing my search I did a double take when I saw they were offering the opening night performance for sale (While roaming through Lincoln Center on the day of the show, I would discovered the opening night performance was on TKTS). Well, I snatched that up immediately. My seat was in the rear of the Loge, but that didn’t matter for that price and the opportunity.

I’d only done the closing of the Bernadette Peters Gypsy prior to this, so my experience with high energy theatrical events was considerably limited. But there in the lobby of the Vivian Beaumont I watched as John Lithgow, Helen Hunt, Marc Shaiman, Scott Wittman, Adam Guettel, Maggie Gyllenhaal, Peter Sarsgaard, Frank Rich roamed about while Mary Rodgers Guettel stood receiving people like royalty.

The uniqueness of this experience is pretty much beyond the mere use of words. I can draw out all the adjectives I know: resplendent, ethereal, cathartic, et al. to describe what is was like for me. But none can ever do justice to the emotional impact that was delivered. I made fast friends with an aspiring actress and her friend next to me. There was the hat placed downstage center on the bench with a pin spot. The cell phone announcement wonderfully delivered in Italian by Felicity LaFortune. Then down came the house lights. And that overture started. A simple harp gliss with a hint of tension building from other instruments which released into the main “Light” theme. I knew within seconds – and this is a rare occurrence – that I was going to love this new musical. And I did. I immersed myself in the beauty and grace of the musical’s staging and scenography. I am forever a fan of Bartlett Sher. One thing about that opening night performance I will specifically never forget is how “Dividing Day” completely devastated me.

The actors were stellar, such legit singing on Broadway, though I was thrown by the more pop sounding Matthew Morrison as Fabrizio, though admittedly, he grew on me during the run. Kelli O’Hara was the perfect embodiment of the child-like Clara, creating a character of nuance and ambiguity that complemented Clark’s Margaret (her replacement Katie Rose Clarke, embodied the childish aspects of the character as well, but was nowhere near O’Hara on the acting and singing fronts). But the entire performance was centered around Clark’s tour de force as Margaret, giving a devastatingly beautiful performance that ranks among the best I have ever seen in my theatregoing life.

The first act ended with the gorgeous “Say it Somehow” with that coda and gasp-inducing black out. The second act ended with “Fable.” The audience went wild. I mean we went completely nuts – the entire house was on its feet before a single person re-entered for their curtain call. And another theatrical first: after the actors made their exit, our applause continued and continued. In fact grew louder and we would only cease once Messrs. Guettel, Sher and Lucas made a bow. I had a feeling akin to sailing, I think. A natural high. I had been both moved and affected by this work of art which to me was challenging but accessible.

I like to consider 4.18.05 the night I rediscovered my lost romanticism. As I left the Beaumont, I was already on my cell phone to Noah, proclaiming “Oh my God, this is the best new musical I’ve ever seen.” And he proceeded to read me back a rave review from Broadway.com. I strolled by the fountain at Lincoln Center in a daze, almost walking into Mr. & Mrs. Peter Boyle, Mike Nichols and Diane Sawyer, who were attending a Dustin Hoffman celebration at Avery Fisher Hall. I watched a rather attractive young couple walk by the fountain, also having emerged from Avery Fisher. The gentleman placed his topcoat over the shoulders of his lover with such tenderness and care that I could and only pause and smile. Truth be told, I’d been more likely to roll my eyes and scoff, but then again, it’s much easier to be a cynic than a romantic, no?

The score was unlike anything I could have anticipated. Orchestrated with as many strings as there are stars in the skies. (I’m a wee bit prone to hyperbole, sue me). All woodwinds save the flute and piccolo, which added just a tinge of melancholy to the score’s sound. And of course there’s that harp, that gorgeous harp around which the entire orchestration is built. I would venture a guess that I’ve listened to this score more times than any other. There were five months where the CD rarely left my player. And the repeat button was on. And repeat listenings/viewings only unraveled more and more depth and skill in the music and lyrics. (I know some people loathed the lyrics, but I admired their dramatic honesty and simplicity). Guettel as a musical composer managed to create a hybrid of the Rodgers & Hammerstein and the Sondheim schools of musical theatre, infused with a neo-classicist stream of consciousness in the flow of the melody.

It was also the night I became an ardent fan and supporter of the Lincoln Center Theatre, a non-profit company that is not afraid to take artistic risks and not afraid to spare any expense when they believe in a work. The show would eventually win six Tony awards – the most of any show that year – including a deserved sweep in the scenographic categories: Lighting, Scenic and Costume Design (the combination of the elements made me feel as though I was actually in Florence). The show was also awarded for its rich orchestrations, score and the coup d’grace: Best Actress in a Musical for Victoria Clark, whose performance in the role will one day be considered legendary. The show may have lost the Best Musical Tony, but it had already won Best Musical of my Heart – sentimental, yes, but I’ve never given that designation to any other show.

The 2004-05 season became a joyous one with four solid shows opening towards the end of the season, three of which were Spamalot, The 25th Annual Putnam County Spelling Bee and Dirty Rotten Scoundrels, and the fourth was Piazza, which became a surprise hit for LCT and warranted several extensions past its original June closing date (eventually extending its run by 54 weeks). By the time it closed on June 2, 2006, it had played 504 performances at the Vivian Beaumont. It would shortly thereafter launch a year-long national tour starring Christine Andreas and Elena Shaddow.

For the first time, I was compelled to go back to a Broadway show. Even when I thought of it prior, I had for whatever reason decided not to. But I returned, and returned. By the time of the closing (which, yes, I also attended) I had seen the musical 12 times. Can you believe it? And no, I don’t regret spending the money on it at all. If I could have, I would have gone back many, many more times. At this point, I do have to thank my friends who were so wonderful putting up with my year and four months of complete and total obsession. I wanted everyone to see this show, hear this score and could talk of little else. I took my a good friend to the closing performance who had listened to me harp on about the show for well over a year. He soon learned that I was rather calm in comparison to the woman to his left (who shouted “MATT!” at Matthew Morrison, who was in the audience for the last show, until he turned and gave her a quick wave). The only new musical to open since that I have appreciated nearly as much was Grey Gardens. I only hope it won’t be too long until a new musical captures my undivided attention.

The Light in the Piazza was a rare experience, and one which will forever hold a special place in my mind and soul. April 18th will always be an incredibly poignant and nostalgic date for me.