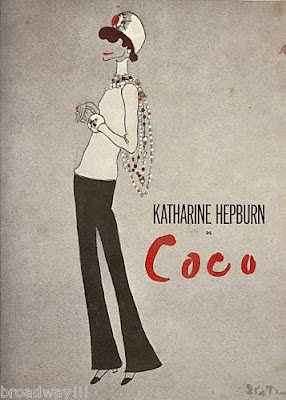 The musical Coco received rather negative reviews for all of the parties involved when it opened in December 1969, with the exception of Michael Bennett and his choreography. However, the negative notices didn’t keep the show from becoming a major theatrical event, spurred on by the presence of Katharine Hepburn in what would be her only appearance in a musical. Hiding her insecurities behind her Yankee resolve, Miss Hepburn gave the audience a mega-watt star turn that defied her limitations as a singer and dancer. While not many folks are fans of the show or its score, I think there is a lot to enjoy on the original cast album (admittedly a poorly produced record). When Hepburn left the show, an actress (Danielle Darrieux, who was French, could sing and dance, and was similar to Chanel) more suitable to the role replaced her and the show folded within weeks. The audience was there to see Hepburn, who kept the Mark Hellinger Theatre filled.

Hepburn took the show out on national tour, with original Broadway cast members Gale Dixon, Jeanne Arnold and George Rose recreating their roles. Joining the cast was Don Chastain as the ingenue’s lover and Daniel Davis as Sebastian Baye, the effete designer who has it out for Coco (Rene Auberjonois won the Tony for his scenery-chewing performance in NY). The tour also had a souvenir program. Featured are publicity shots and stills of the production, but also one of the most unusual star bios I’ve ever seen with Hepburn providing a running commentary about every role she had played professionally from 1928-1969. Only a no-nonsense star like Hepburn would be so frank in looking at her career.

The following is a chronological list of Miss Hepburn’s plays and films and her capsule comments on each. [A couple of the dates regarding her films are inaccurate, and I considered changing them. However, I figured it was better to just present what the star had included, imperfections and all.]

“TOP OF THE HEAP IN ONE YEAR…SILLY”

“FLASH IN THE PAN…EQUALLY SILLY”