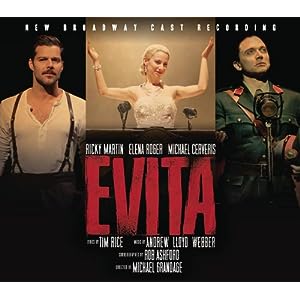 Andrew Lloyd Webber’s shows don’t do much for me. I’ve never really been taken in by his style, and I tend to approach his shows from a mostly academic perspective, pulling the albums from the shelves every year or so for a refresher. The one exception is Evita. The rock opera by Webber and Tim Rice, which made stars of Elaine Paige and Patti LuPone, fascinates me to no end. I think it’s the most musically and dramatically compelling score Webber has ever written for the theatre, with a riveting and often thrilling look at a larger than life and divisive political legend.

Evita is back on Broadway for the first time since the original production closed, in a transfer of the acclaimed 2006 London production directed by Michael Grandage and choreographed by Rob Ashford. I haven’t seen the new smash-hit production yet, but Masterworks Broadway was kind enough to send me the new 2-disc cast album, the first complete recording of the stage score since 1979. And I haven’t stopped listening since I removed the shrink wrap.

As Che, Ricky Martin sings very well but his characterization likes bite and frankly, he sounds as if he’s narrating a school project. Where his character should be filled with anger and dripping with venom, Martin only seems mildly annoyed by Eva’s antics. Perhaps Harold Prince was right in modeling the character after Che Guevara. The always-reliable Michael Cerveris makes Juan Peron, usually a thankless role, the show’s emotional center. Max von Essen is the best Magaldi I’ve ever heard, while Rachel Potter sings a gorgeous “Another Suitcase in Another Hall.”

As for Evita herself, there’s been a lot of controversy over the casting of the Argentinian actress Elena Roger, whose vocal performance has been almost as divisive as the late Argentine First Lady herself. While I obviously cannot offer an opinion on her live performance, I can compare and contrast her singing between the 2006 London album and this new recording. In the intervening years, Ms. Roger’s English and diction have greatly improved, and her singing is stronger and clearer. I suppose I am in a minority, but I love the way she sings the role. Ms. Roger sings Eva with a flexible, steely voice and I love what she puts into the words acting-wise.

The liner notes are filled with color photographs. There no plot synopsis, but director Grandage has written a short essay. The complete lyrics are included. The production has new orchestrations by Lloyd Webber and David Cullen, which are a mixed bag. In certain sections they soar, in others it sounds like karaoke backing tracks. Also: the production includes the Oscar-winning “You Must Love Me” from the 1996 film adaptation.

Ultimately, no matter your opinion of Roger, this is an Evita worth hearing and worth the discussion. Included is a bonus track of Roger singing ‘Don’t Cry for Me Argentina” in Spanish which makes me long to see her in a Spanish language production.