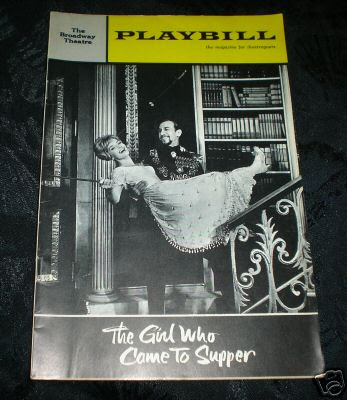 “Talented ladies the pros think will make it on Broadway”

While browsing through my Playbill for the musical The Girl Who Came to Supper (which ran for 112 performances at the Broadway Theatre from December 8, 1963 to March 14, 1964), I came across this particular feature in which producers picked the actresses they felt were most destined for stardom. This seems like the type of feature that I would prefer to see today, rather than the phony restaurant recommendations.

Let’s see if their predictions were correct…

“If the axiom that stars are born, not made, is true, it is equally true that opportunity and luck are an important part of the picture. There’s a 17 year old named Lesley Ann Warren in 110 in the Shade, and if the reactions of the audiences and my associates mean anything, she is headed for stardom. Lesley has the radiance and the special magic about her that, combined with her talent for singing, dancing and acting, insure her a happy future in the theatre. When she first auditioned for me, without benefit of previous stage experience, I knew she would not disappoint me. I was right.”

“Next year’s star? I nominate Carolan Daniels, an almost terrifyingly gifted emigree from California who is playing a half-dozen different characters in the fascinating off-Broadway charade called Telemachus Clay. She has incredible grace, delicacy and charm. Young Miss Daniels looks like a Eurasian pixie, which should be no drawback in a business always seeking the new, interesting, off-beat and beautiful in looks and talent. All of these adjectives apply to Carolan. But there is no adjective adequate to describe the personal poetry with which she infuses every line she reads and every character she portrays. It is the stuff that stars are made on, and the stuff that makes stuff. I believe it will make Carolan Daniels.”

“I look at an actor’s movements and the excitement generated by his performance, when I judge a potential “star.” It becomes a matter of personal involvement, what does the actor do to me? Is there variety within their acting ability? And the most essential element… the actor’s level of communication with his audience.
With the aforementioned in mind, I submit Miss Cicely Tyson as a potential star. Cicely is unusually attractive, even exciting looking, and moves beautifully. Her performances have generated a great deal of empathy every time I’ve seen her on stage. She needs only the opportunity to work to further develop her craft to become a complete star, in the true sense of the term.
I firmly believe she will be one of the first in a new wave of Negro stars to emerge within the American theatre. The “Negro problem,” robbing America of many fine artists, has consumed us for too long a time, and I truly feel that the climate is such that complete acceptance by all Americans of the outstanding actor, regardless of race, is now within us, insuring Miss Tyson of an honest appraisal, a just critique and an assured acceptance.”

“Next year’s star may very well be a bit of this year’s sunshine, named Penny Fuller. She has beauty, she has intelligence, she has great warmth and charm, she has a kind of self-generated incandescence that is simply too big and bright to be confined. Soon, I suspect, it will illuminate entire theatres, marquees included. This little dynamo is currently whirring away pretty much unseen as Elizabeth Ashley’s understudy in Barefoot in the Park. But one of these days she is bound to have a good part of her own. Then watch her glow, glow, glow!”