I once did a book report on The Mystery of Edwin Drood in 8th grade because I procrastinated and it seemed like a good idea at the time. Frankly, I don’t remember much, except that the book was unfinished and I got a good grade. While I haven’t picked up the book since, the novel by Charles Dickens caught my attention once again when I discovered Rupert Holmes’ unique musical adaptation. Since Dickens died leaving half the book unwritten – and leaving no authoritative record of “who did it” – Holmes created a novel concept of having the audience vote to determine the show’s ending. (The original production’s tagline was “The Solve-It-Yourself Broadway Musical”).

The musical, also known as just Drood (or as I like to call it, Murder She Drood), is presented as an English music hall with actors playing a Victorian troupe performing the Dickens novel, led by a Chairman (a master of ceremonies, of sorts) to help keep the audience informed of facts, and to keep the show running as smoothly as possible. The knowing metatheatrical nature and general rollicking frivolity behind Holmes’ concept made the show a success at the Delacorte in Central Park, as well as its Tony-winning run at the Imperial.

The musical is back on Broadway, courtesy of Roundabout Theatre, with a wonderful cast headlined by the legendary Chita Rivera at Studio 54. While I didn’t love this production as much as many others have, I had a good time, especially with a stellar cast to help gloss over some of the problematic elements of the piece.

The resulting show is something of a joyous mess. The score is filled with music hall style turns, tuneful and entertaining. There are too many songs (about a half dozen could easily be cut), and not enough plot, and Dickens’ novel ultimately becomes an afterthought in this theatrical exercise. However, it is the execution of the concept and the free-for-all voting experience that makes the show a pleasant divertissement.

The legendary Chita Rivera is game but not quite right for the Princess Puffer, with a Cockney accent that veers somewhere between Brooklyn and Staten Island. However, she is so mesmerizing onstage, it’s almost impossible to look at anyone else whenever she’s around. Stephanie J. Block is the title character; hilarious and spirited with a voice to last for days – that famed E is no joke.

Will Chase is near-perfect as Jasper, finding the comedy in the split personality (and likeliest murderer) and singing exceptionally well. However, his pronounced breathing between phrases drove me nuts. Jim Norton is the Chairman, charming but surprisingly subdued. Betsy Wolfe is Rosa Bud and scores with the hauntingly beautiful “Moonfall,” (and her Jennifer Tilly-esque delivery of the line “Good one, Helena” should never be forgotten). Peter Benson, Gregg Edelman and Robert Creighton are also on hand to supply some distinctive period comedy flair.

The company mingles with the audience in the moments leading up to the rollicking opening number, but the show lags and doesn’t reach this same pinnacle until after the rousing “Don’t Quit While You’re Ahead” when the narrative ends and the concept takes over. Nevertheless, there is much fun to be had, especially if you just show up for the second act.

For those who are interested, the night I saw the show, Helena Landless (the sublime Jessie Mueller) was voted Dick Datchery, Neville Landless (a game Andy Karl) was voted the murderer, and the Puffer and Bazzard were voted the lovers (made all the more raucous as Rivera, on the eve of her 80th birthday, pushed Peter Benson’s face into her bosom). 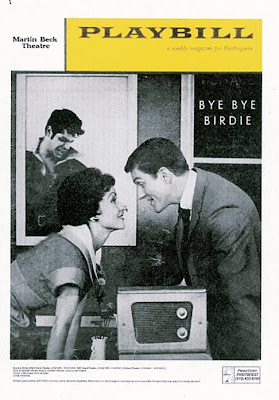 When the Roundabout revival of Bye Bye Birdie opens this Thursday, it will mark the first time the show has been seen on Broadway since the original production closed in 1961. That first production starred Chita Rivera and Dick Van Dyke, with Paul Lynde, Kay Medford, Dick Gautier and Susan Watson filling out the rest of the principal roles. For director-choreographer Gower Champion, it was the beginning of his second career as a Broadway auteur. Charles Strouse and Lee Adams wrote the score, an engaging mix of character numbers and gauche parodies of period rock and roll music.

I first saw the musical when I was in elementary school and a family friend was playing Rosie in her high school production. Only a few weeks later I found the original cast album in the store, on audio cassette no less. It marked my first purchase of an Original Broadway Cast Recording. Well, I began to listen to it ad nauseam. From its jubilant overture to affectionate finale I have always been endeared by its charm and effervescence.

Dick Van Dyke’s triumph brought him the Tony and the attention of Hollywood. After playing the role in New York for a year, he went to Hollywood to start work on The Dick Van Dyke Show. Champion won for his direction and choreography and the show itself won Best Musical, besting Do Re Mi and Irma La Douce (there was some scandal that Lerner and Loewe’s Camelot wasn’t even placed in nomination).

Tangent: That year Richard Burton in Camelot and Elisabeth Seal in Irma La Douce won as leading actors (she over Julie Andrews, Carol Channing and Nancy Walker, no less!) Van Dyke and Tammy Grimes in The Unsinkable Molly Brown (besting Chita) won for Best Featured Actor and Actress in a Musical. All four roles are considered leads in their respective shows and in the case of Grimes, it’s a star vehicle. But back then the rules were very rigid: above the title you were a lead and below the title you were featured or supporting. It’s not very fair for those who are genuinely offering a memorable supporting or featured turn to compete with their leads. Interestingly enough, Tammy Grimes’ name was moved above the title after winning the award.

Van Dyke was already in California when the awards were handed out. Back then there was no major telecast, only a small dinner ceremony in NY. Unceremoniously, Van Dyke was the only one home when he found a telegram under his doormat congratulating him on his win.

But I digress. The show was a decent hit in NY, running for 607 performances. The original London engagement with Rivera and Peter Marshall played for 268 performances. Then of course, there’s the film. Yes, it’s got Dick Van Dyke and Paul Lynde recreating their roles. Ann-Margret played the innocent Kim as a knowing vamp, with a memorable delivery of the title song over the opening credits (which was written specifically for the movie). Janet Leigh and Maureen Stapleton were on board as well. However, it just doesn’t work. Too much of the original story was altered, and as a whole it’s lacking. There was an early 90s national tour starring Tommy Tune and Ann Reinking; a 1995 made for TV movie starring Jason Alexander and Vanessa Williams tried but failed to capture to the spirit of the original. The title even found itself as part of the City Center Encores! lineup in 2004.

Now, coming full circle, it will open at the refurbished Henry Miller’s Theatre this week. But before it does, I offer this glimpse back to the original cast performing selections on Ed Sullivan in November, 1960…

Dick Van Dyke tries to cheer up some of Conrad Birdie’s fans in a train station with “Put on a Happy Face”:

Paul Lynde performs the scene leading up to and including “Hymn To Ed Sullivan,” in which his character vents the frustrations at being inconvenienced by Conrad Birdie (an appropriately crass Dick Gautier):

Rosie, who’s waited eight years for Albert to give up the music industry to get married, vents her frustrations toward Albert’s mother, who is constantly berating Rose for her Spanish heritage. Fed up, she offers “Spanish Rose”:

Here is some rare footage from the original 1975 production of Chicago shot during a dress rehearsal, which includes a couple minutes of “Loopin’ the Loop,” the original finale that would be replaced by “Nowadays/Hot Honey Rag” (and whose theme remained in the show’s overture).

For some inane reason or other I missed the Kennedy Center Honors in 2002, even though I knew Chita Rivera was on the dais. However, a good friend taped it for me just in case, so I had a save. (For you younger folk out there, this was before the youtube). About six weeks later, I was back from college in order to have my four wisdom teeth out.

After the surgery, I came home and waited for the painkillers to kick in (I was Violet Weston that weekend, kids…), I popped in this video to ease my discomfort as the novocaine wore off. That was a memorable morning kids, for various reasons (hear my brother tell the story of how I fell out of a chair).

In spite of the pain I was feeling, I picked myself off the couch and rewound the tape again and again. I still get chills seeing it.

Now this, Tony folks, is how you do a Broadway medley:

In 1986, following a performance of Jerry’s Girls, Chita Rivera was seriously injured in a car accident, breaking her leg in 12 places, requiring surgeries and extensive rehabilitation. Two years later, after a significant recovery, Chita was back onstage headlining an international tour of Can-Can, accompanied by the Rockettes and Ron Holgate. Here is a clip (note this particular stop is being performed in the round):

The musical is Bajour. The story is about a woman (Tony-nominee Nancy Dussault) doing a doctoral thesis on a tribe of gypsies in New York City who con old women out of their life-savings. Yes, you read that correctly. Herschel Bernardi, Chita Rivera and Mae Questal round out the cast, with Michael Bennett, Herb Edelman, Paul Sorvino and Leland Palmer in the ensemble. The show played 232 performances during the 1964-65 season at the Shubert and later Lunt-Fontanne Theatres. Here is Rivera leading the title song:

After I found “The Shriner Ballet,” I found this. Delightful is the word. Enjoy.