At the world premiere in New Haven, the audience eruption following “The Rain in Spain” stopped the show dead, as they say. The hysteria continued unabated, [Rex] Harrison and [Robert] Coote sitting in frozen astonishment: nothing like this ever happened in drawing room comedy! Finally Miss Andrews – who at twenty already knew her around – grabbed her colleagues by the elbows (the number ended with them all collapsed on the couch), dragged them down to the apron, and led them in a bow. And the rest, as they say, is history. (At future performances, Mr. Harrison controlled all bows).

-Steven Suskin discussing My Fair Lady in his essential Opening Night on Broadway, which looks at what the major critics had to say about all musicals of the Golden Age 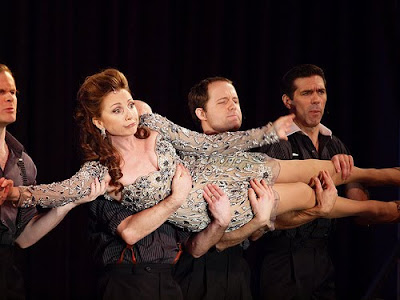 Playbill’s Andrew Gans talks to Donna Murphy on her relationship with Sondheim and her upcoming role as the Mayoress in Encores! Anyone Can Whistle. The following is an excerpt on how she got the part:

‘Murphy is now getting ready to tackle her latest Sondheim role, Mayor Cora Hoover Hooper in the upcoming Encores! production of the short-lived Sondheim-Arthur Laurents musical Anyone Can Whistle, which co-stars Tony winner Sutton Foster and Tony nominee Raul Esparza. It was another multiple Tony winner, however, who Murphy says helped get her the gig: Angela Lansbury, who starred in the original production of Whistle.

“This year [the Drama League was] lucky enough to be honoring [Lansbury], and I was asked by Michael Mayer to learn and sing [Anyone Can Whistle’s] ‘Me and My Town.’ I’d only heard that song once before, and I thought, ‘Oh, what a great song!,’ and I said, ‘Yeah! Yeah!’ . . . I had such a good time, and that night [Lansbury] came up to me afterwards and kind of took me by the shoulders and she said, ‘Have they called you?’ And I said, ‘Who?’ And she said, ‘Encores! Have they called you?’ And I said, ‘No.’ And she said, ‘Why aren’t you doing it?’ And I said, ‘Well, I haven’t been asked.’ She said, ‘I’m calling them! I’m calling them!’ And, it was incredibly flattering, but it was also one of those situations where I [didn’t] know what’s going on [with the casting]. It certainly was on my radar that they were doing this show because any time that there’s a Sondheim show happening, my ears prick up and I’m like, ‘Is there something in it for me?,'” she laughs.’

Does this mean Angie is entitled to ten percent…?

“Since Bobby also played Younger Brother in the recent Ragtime revival, we talked about its untimely closing. The devastating thing he said was that the producers were willing to keep the show running (!), but the theatre made them leave because they had another show that wanted to come in. So, Ragtime had to close to make way for The Orphan’s Home Cycle to open at the Neil Simon…but then it wound up going to another theatre! So, now, the Neil Simon is empty. Wah! The other sad news is, there is no full cast album. But, the good news is there’s going to be a Flaherty/Ahrens compilation CD coming out, and the new cast of Ragtime is going to record four songs for it!”

“I mean, there are times when you walk into that dressing room and you think, ‘I can’t do this. I cannot do this.’ And it’s a curious thing: When you sit down in front of that mirror and you pick up that first piece of makeup and you start to apply it – you see how I immediately go under the eyes? First thing! – and suddenly, you transform yourself into that person who is capable of going on stage and delivering that performance. And you do it, and yes, you can. Yes, I can! Yes, I can!”

“I’d like to do one great movie before I pass along the way,” she said. “I don’t know what it’ll be. But I think there’s one out there somewhere.”

Angela Lansbury, in her sit-down interview with Katie Couric on CBS Sunday Morning.

Whole songs and chunks of dialogue disappeared and new material had to be learned. Sets and costumes changed. “It was Dunkerque,” recalls [Patricia] Routledge. “I never knew how I would get to the end of the show. Sometimes I didn’t know which way I was facing.” Adds [Ken] Howard: “I couldn’t sleep or eat. I found it hard to focus my mind on what I was doing onstage. I became a zombie, an automaton.” But, says Howard, the endless changes that were made in the show were only “like rearranging the deck chairs on the Titanic.”

– The two stars of 1600 Pennsylvania Avenue on the chaos of the experience in an informative article documenting the show’s failure from the May 31, 1976 edition of Time Magazine.

I don’t know what it is about a bomb that really brings out the creativity in journalists and critics. While there are a plethora of gems that I could cite from the universal evisceration received by Roundabout’s dead-on-arrival revival of Bye Bye Birdie, I’ll let you enjoy finding those on your own. But reading Harry Haun’s account of the opening night festivities on Playbill.com, I encountered this insightful passage with director-choreographer Robert Longbottom. Here the auteur-in-training talks about some of the touches that make this revival unique:

‘Longbottom has made quite a few alterations in the original text. “The first act wasn’t touched, not a word of it,” he quickly pointed out. “The second act—I wasn’t crazy about the way one thing flowed to the next. Nor were Charles and Lee, so we all put our heads together and looked for ways to make it a little more cinematic. “We found a better place to put ‘Kids,’ and I got rid of the Shriner’s Ballet, which I had no interest in doing. It was [the original director] Gower Champion’s number. It had nothing to do with the plot. It forwarded the plot nowhere. I didn’t really want my leading lady on her knees underneath a table, actually. Which is exactly what that was. I didn’t quite get that. I’m sure it was fabulous, but it wasn’t for me.”‘

Whenever I listen to the sublime original Broadway cast recording of A Little Night Music, I’m always impressed with how Stephen Sondheim establishes Fredrik Egerman in the musical’s first song. Fredrik is a middle-aged lawyer whose eleven month marriage to naive 18 year old Anne has gone unconsummated. During an afternoon nap he, in true lawyerly fashion, lists all the ways he can go about seducing his wife. (His impetuous but staid “Now” is countered in a few minutes by her “Soon”). His son Henrik interjects with “Later” and eventually all three motifs are weaved together in contrapuntal soliloquies. The English major in me has always been amazed at this patter section in which he vents his sexual frustrations by listing the books he can read to get her into the mood…

“Which leaves the suggestive,
But how to proceed?
Although she gets restive,
Perhaps I could read.
In view of her penchant
For something romantic,
De Sade is too trenchant
And Dickens too frantic,
And Stendhal would ruin
The plan of attack,
As there isn’t much blue in
The Red and the Black.
De Maupassant’s candour
Would cause her dismay,
The Brontes are grander
But not very gay,
Her taste is much blander,
I’m sorry to say,
But is Hans Christian Ander-
Sen ever risque?
Which eliminates A…”

“Avenue Q is about all of us, so why should it close? People arrive in New York every day hoping to make their dreams come true, so as long as they’re here, we’re here! It’s just one of the funniest, wittiest and wisest musicals ever written and the more you see it, the more you love it.”

-Producer Kevin McCollum, on the decision to reopen Avenue Q off-Broadway next month.

“But rudeness, in my worldview, is not a small crime. When a phone ring rips everyone’s attention from the illusion that has been carefully created in a theater, that’s a kind of violence. When rapt darkness is shattered by the light of one iPhone, I find myself dreaming of mob rule. It is impossible to imagine how jarring this oblivious multi-tasking must be to performers, who, we should remember, see and hear everything in the house.”