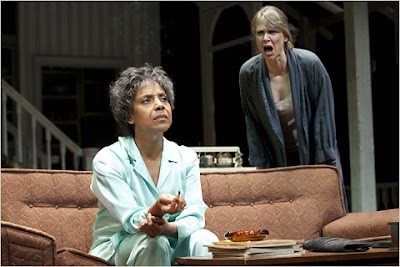 Morton is back on Broadway as the definitive Barbara Fordham in August: Osage County, the role she originated at Steppenwolf, in NY and in London. She was interviewed by the NY Times this past week. Here are some highlights:

Amy on the three Violets:

“Deanna was much more of a Texas flower, very feminine, very needy on stage, in that way that Violet is. Estelle wasn’t as much. She was a little tougher and a little more blunt. But what’s great is it still really worked. Phylicia and I are still kind of working it out. I got to tell you, when she gets mean, it’s scary. I mean, she lays us low at that dinner table.”

On different reactions between NY and London audiences: