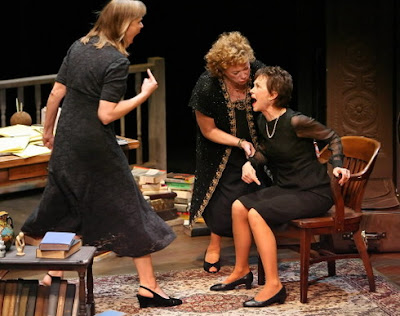 It was announced late this afternoon that the smash hit play August: Osage County will be closing on June 28 at the Music Box Theatre after 18 previews and 648 performances. The play won five Tonys including Best Play and the coveted Pulitzer Prize for Drama and is one of my most treasured theatrical experiences of all time.

The closing announcement comes as a bit of a surprise, especially since new star Phylicia Rashad has received so many raves for her performance as Violet. The play, which imported from Steppenwolf in fall 2007, was originally to be a sixteen week limited engagement at the Imperial Theatre, but proved to be such a huge success that it transferred next door to the Music Box for an open ended run in April ’08. For a three act play without any stars and a running time of three hours and twenty minutes, this run is quite a feat.

I’ve had a special affinity for the writing of Tracy Letts, the direction of Anna D. Shapiro and the acting of the ensemble, from Deanna Dunagan and Rondi Reed to Elizabeth Ashley and Rashad, all the while in utter awe of Amy Morton. It has been a show and a production that will stay with me always, with so many moments of sheer tragedy and sheer comedy forever etched on my mind.

Those of you who never got to NY for the play, never fear: Broadway replacement Estelle Parsons will be headlining the national tour starting this August. Plus, Hollywood is working on a film adaptation (though I still think the original production should have been filmed for PBS). For fans of Steppenwolf and Letts, there are reasons to celebrate as they are bringing his latest play Superior Donuts to NY this fall.

I have been blessed to have been there for August on its opening night at the Imperial on December 4, 2007, so it feel right that I’ll be there at the final performance. So as John Cullum and Kimberley Guerrero take their seats in Beverly’s den on June 28, I will experience the show for the seventh and last time in this incarnation, a beautiful and cathartic bookend.

A play like this comes along so rarely. Plus, there are some great discounts if you want to rush to see it before it goes! I hope to see you there…