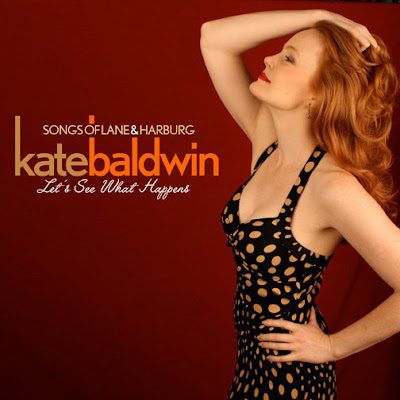 Christmas came early this year. It started in October when Kate Baldwin released her sublime solo CD “Let’s See What Happens.” The album features Baldwin singing the songs of Lane & Harburg, the men responsible for her current success in the Broadway revival if Finian’s Rainbow, and is a disc that I find myself listening to on a regular basis. I treated myself to a rather luxurious Christmas present: an evening at Feinstein’s hearing Kate singing selections from her album.

Truth be told, I actually met Kate Baldwin the person before I became familiar with Kate Baldwin the artist. We were introduced to one another by SarahB last November at Birdland, where she and I simultaneously geeked out when Jonathan Tunick conducted the Broadway Moonlighters in the Merrily We Roll Along overture. I’d be lying if I said I wasn’t somewhat star struck by her warm, gracious and effusive personality.

The first opportunity I had to see the actress at work was in the Encores! presentation of Finian’s Rainbow last March. There was something ethereal in the moment she opened her mouth to sing the first few measures of “How Are Things in Glocca Mora?” The quality of the vocal timbre, the tone, vibrato and underlying emotion were fused in this beguiling sense of entrancement. Her understated, showstopping delivery was one of the highlights of the musical, which charmed enough critics to warrant a Broadway transfer. Kate Baldwin entered, as she calls it, “Leading Lady Land.”

While Baldwin has amassed some impressive credits over the past ten years, she has remained mostly on the periphery. She has appeared in some shows off-Broadway and Encores, but mostly understudied major roles on Broadway in Thoroughly Modern Millie and Wonderful Town, plus noted turns in Opening Doors at Carnegie Hall and at Wall to Wall Sondheim. In regional theatres around the country, she has had the opportunity to play many of the classic musical theatre heroines: Nellie in South Pacific, Maria in The Sound of Music, Marian the Librarian in The Music Man, Amalia in She Loves Me, etc, etc. and so forth. Kate is a performer of such versatility that she can easily be both ingenue and soubrette. In fact, were she born in the Golden Age of musical theatre, the creators of these shows would have breaking down her door to write for her. It is the unexpected and deserved success of Finian’s Rainbow that has catapulted her into the big leagues and is likely to be a serious contender for a Tony nomination this spring.

Sarah informed me of Kate’s plan to record a solo album, which would homage the canons of both Burton Lane and Yip Harburg, the men responsible for the Finian’s score. It was the news that she would record “That Something Extra Special” from Darling of the Day had me about as thrilled as you can imagine. That show, which featured Harburg’s lyrics set to Jule Styne’s music, is one of my all-time favorite scores. It was a fast failure in 1968, but earned Patricia Routledge a Tony, and became a cult favorite of many musical theatre enthusiasts, Baldwin included.

On the night of the first preview of Finian’s Rainbow, I had the pleasure of talking with Kate about the songs on her album, our mutual admiration for Patricia Routledge and many long-forgotten scores that languish in obscurity. There is a great similarity between her and the great Maureen O’Hara. Both are feisty, independent yet always feminine (and both excellent singers) Such is the case I think Encores! should revive Donnybrook! (the underrated musical version of The Quiet Man) for her. She is also exceptionally well-versed in the history of musical theatre, and is one of the few people able to keep up with my inherent esoteric rambling. (Like true musical theatre geeks we finished each other’s sentences about various shows and various composers). One of the beautiful things about her solo album is that most of the song selections are obscure gems that have long been waiting for rediscovery.

The album was released in October by PS Classics, just before opening to unanimous raves from the NY critics. The disc is a necessity for any musical theatre fan. Not only is it an auspicious debut effort, but it’s also one of the best solo albums I’ve heard in quite some time. The first cut is the aforementioned “That Something Extra Special,” which establishes the intimate tone for what’s to come, and is also an apt description of Kate’s vocal styling. Kate possesses a voice that is as at ease in soprano ballads as it is in uptempo jazz. She also enlisted many of the friends she’s made for orchestrations, including Jason Robert Brown, Rob Berman (her musical director and pianist at Feinstein’s), Georgia Stitt, and EGOT winning Jonathan Tunick (who also played clarinet for one of the cuts – even Benny Goodman would eat his heart out!).

It’s hard to pick out favorites, as I don’t think there is a single track on the album that I don’t enjoy. But my love goes out to the combination of “Let’s See What Happens,” also from Darling of the Day and “Open Your Eyes” from Royal Wedding, combined in a simple, elegant piano arrangement by Berman (who fuses the songs with the unexpected but brilliant “Emperor’s Waltz” by Johann Strauss). There are upbeat readings of “Come Back to Me” from On a Clear Day You Can See Forever (Lerner & Lane), “I Like the Likes of You” from Ziegfeld Follies of 1934 (Vernon Duke & Harburg) and “Have Feet, Will Dance” from the 1957 TV musical Junior Miss (Lane & Dorothy Fields). Contrasting are plaintive readings of “Here’s to Your Allusions” from the infamous Flahooley (Sammy Fain & Harburg) and “Paris is a Lonely Town” from Gay Purr-ee (Harold Arlen & Harburg). She also plants the tongue firmly in cheek as she takes on Lena Horne’s unusual eleven o’clock number “I Don’t Think I’ll End It All Today” from Jamaica (Arlen & Harburg), an infectious calypso dismissing suicide. The album ends with a stunning “The World in My Arms,” originally from Hold on to Your Hats (Lane & Harburg). Her reading of the song is so intimate and so personal, it’s like stumbling across a love letter that fell out of the pages of a diary.

Being at Feinstein’s last night felt like a sort of throwback as we watched Kate Baldwin the Broadway star became Kate Baldwin the chanteuse. It was her first time performing at the venue, and apparently her first attempt at cabaret. She delighted with her effortless charm and offbeat sense of humor, all the while radiating a luminescent star quality. Her banter included lots of love for her husband, the equally charming and gracious Graham Rowat, as well as stories from her musical theatre background. The audience was smitten from the very start and laughed amiably as she recreated her high school performance as Evita (completely with all operatic head voice and absolutely no chest voice), a summer camp performance as Gloria Rasputin in Bye Bye Birdie as well as stories about looking up various fans on Facebook.

She set list for the evening contained mostly gems from the CD, delivered with the same intimacy and compelling intelligence found on the record (did I mention she referred to it as her “record” all evening? Points for period charm). Poised, patrician and elegant she was at ease with a ballad as she was with an uptempo number; transforming before our very eyes into a girl singer along the likes of Rosemary Clooney. She also added a few numbers not found on the album: “Too Late Now,” the gorgeous ballad by Lerner & Lane from Royal Wedding and a charming rendition of “The Merry Old Land of Oz” from, well, you know, but that included some tongue in cheek nods to other’s songs in Finian’s Rainbow. She also interrupted herself during Cy Coleman & Dorothy Fields’ “I’m the Bravest Individual” from Sweet Charity to relay amusingly self-deprecating anecdotes of the unintentionally back-handed compliments she’s received over the years. Which leads me to a question: when will Ms. Baldwin record an album of Coleman songs?

Kate ended her set with “The World in Your Arms,” which is, as I have been known to put it, musical theatre zen. Her encore was the delicate arrangement of “How Are Things in Glocca Mora?” from her album, which brought the enchanted crowd to its feet. If Mr. Feinstein is smart, he should already be arranging her next engagement before the Cafe Carlyle and Metropolitan snatch her up (which given her exceptional year, is an inevitability).

The season of Kate Baldwin, as Sarah has dubbed it, continues as Kate, Cheyenne Jackson and the cast of Finian’s recently recorded their revival cast album, which will be released by PS Classics early next year. Last night wasn’t just Kate’s first time at Feinstein’s, but also mine. (I even wore a suit for the occasion, and those who know me well know that’s a feat in itself). I couldn’t imagine a better first experience than hearing Kate, while sharing more laughs and good times with those good and crazy people, my friends Sarah, Kari and Roxie. Fortunately, this time no one yelled at us, nor did Roxie yell at anyone famous. So in all, it was an evening I shall never forget. Oh – and one more innocent confession: I’m a little bit in love with Kate Baldwin. (I hope you don’t mind, Graham). But truth be told, is there anyone out there who isn’t?