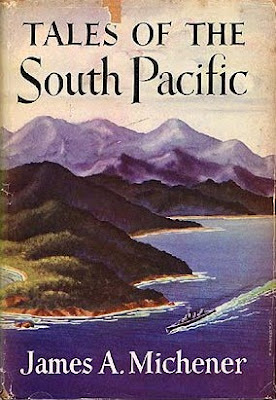 The sublime revival of South Pacific is poised to end its run at the Vivian Beaumont after a monumental 1,000 performances this August. I’ve seen the show twice; once on its opening night and the other on the night Barack Obama was elected our President. The production is a personal favorite of mine, and I hope to make another trip back before it ends.

The musical is based on the collection of short stories by James A. Michener, and there are two simple references to the original text. They are quotations which bookend the book’s introductory chapter which are projected onto white scrim; one before the overture, the other after the curtain call.

We have had an old mass market paperback edition of Tales of the South Pacific lying around the house for years. I got it in elementary school, but I didn’t read it until 2005, a result of seeing the concert at Carnegie Hall. It’s a collection of tangentially related short stories all revolving around Operation Alligator, a fictive military operation which took the restless Seabees and sailors out of their restless waiting and into the heart of the Pacific theatre of WWII. I couldn’t put the book down, I was fascinated – as I always have been and always be – with the history of the Second World War.

I can’t say that I grew up as a military brat, as my father (a Marine, once and always) left the military more than 20 years before I was born, but there was an immense amount of military influence in my childhood. Many family friends were veterans of WWII, the Korean Conflict and Vietnam. So I have spent much of this time talking with them about their experiences, and have an immense appreciation for the sacrifices they have made and difficulties they have gone through for our benefit.

This past week marked the 65th anniversary of the famous flag-raising on Iwo Jima. Some of my time this past week was spent helping my father get ready to go halfway across the world. He is currently on a military tour with other veterans who are meeting in Guam. They will be visiting Iwo Jima for a ceremony honoring the loss of both US and Japanese life during that bloody battle.

On an entirely different note, I am seeing the new musical Yank! at the York Theatre on Saturday, so there’s been a lot of WWII on my mind lately. I have seen practically every film about it, read numerous books – both fiction and non-fiction, and have seen countless documentaries about it. It’s been something I’ve been aware of ever since I can remember and my fascination continues.

It was the Michener quote at the end of South Pacific that I recall today. I didn’t expect it, nor did I expect to be as moved as I was by it:

“They will live a long time, these men of the South Pacific. They had an American quality. They, like their victories, will be remembered as long as our generation lives. After that, like the men of the Confederacy, they will become strangers. Longer and longer shadows will obscure them, until their Guadalcanal sounds distant on the ear like Shiloh and Valley Forge.”

-James A. Michener, Tales of the South Pacific