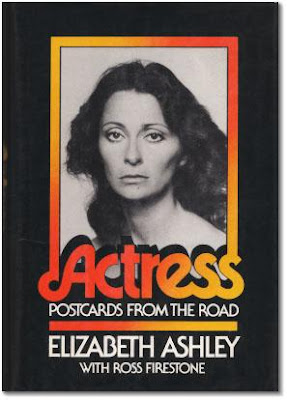 One of the most memorable moments from the opening night performance of Superior Donuts occurred prior to the actual show. I was at Angus having drinks with Steve, his partner Doug and Gil of Broadway Abridged, when on our way out we encountered upon the estimable Elizabeth Ashley. The actress was seated quite casually, drink in one hand, cigarette in the other and in a moment of pure nerve I decided to speak with her. Our conversation lasted five minutes, but it was one of most cordial, invigorating exchanges I have ever experienced with an actor.

A couple weeks ago, SarahB gifted me a copy of Ashley’s long out of print memoir Actress: Postcards from the Road, that she had found while out shopping in Texas. There were certain things I knew of Ashley – her Tony win and shoot to fame with Take Her She’s Mine, having Barefoot in the Park written specifically for her by Neil Simon and of her marriage to actor George Peppard. But – and this shouldn’t be as surprising as it was, but it is – there was a lot about the legend that I did not know. This book offered unusual candor in talking about the acting world of the 60s and 70s, and also regarding the struggles and challenges of being an artist of the theatre.

She doesn’t consider herself to be much of a writer, but with the help of Ross Firestone, she told her stories and he magnificently captures her voice in the text. The book is rather episodic and conversational – she establishes who she is and what she’s doing in her brief introduction. In the book she’s not going to separate her public and private persona and vows to be blunt:

“I know one thing for sure: You can tell an American the truth about anything and if you are really straight you are probably in for a terrific conversation. You may not get agreement, but you will almost certainly have a good, hot, rich exchange. Curiosity, compassion, and imagination are the most consistent spiritual characteristics I have found in the American psyche. This book is not an autobiography. It is about how I found my ticket to ride…”

She starts off with a breakdown during the run of Barefoot in the Park, where she felt she wasn’t good enough and sensed that everyone, especially co-star Robert Redford was aware of it. Highs and lows are traversed – the betrayal of her confidence by Sydney Pollack that cost her the lead in The Slender Thread, her volatile marriage to alcoholic Peppard, for which she gave up her acting career, the birth of their son, Christian, who really gave her the first real sense of identity she’d ever known. She left Peppard when alcohol started dictating violence and jealousy, culminating in an episode where she had to place a gun at the back of his skull to get Christian out of his drunken clutches.

She had given up on her career after turning down the film version of Barefoot in the Park and needed to work from the bottom up to get back into shape as both a performer and a professional. This involved one-shot appearances on minor television shows and appearances in movies of the week; anything to get her back into shape and so she could earn her stripes. In one episode of Mission: Impossible, she challenged herself to work as hard as possible on a climactic scene, and the director saw the effort she was making and why she was making it and it really clicked. Her comeback was fully realized in her highly acclaimed turn as Maggie the Cat in the revival of Cat on a Hot Tin Roof that opened in Stratford, Connecticut, moved to Broadway and became the hottest ticket in town.

However interesting her acting career, it is always the personal information that is the most fascinating; alternately amusing or harrowing. On the former path, she relays with considerable non chalance an affair with screenwriter Thomas McGuane. She and McGuane dallied for quite some time – with the full approval of McGuane’s wife who became one of Liz’s good friends. The three of them, taking sexual liberation by the horns and exercising their free love thought they had established the great sexual utopian experiment. Though she doesn’t mention her by name, merely a polite but terse “star-lette,” she mentions how Margot Kidder came along, snatched up McGuane ending his relationship with both his wife and Ashley.

The harrowing – and one of the most personal stories she relays was a recollection of her first pregnancy, with actor James Farentino (also her first husband) in the early sixties. She was about to go into Take Her, She’s Mine when she discovered she was unmarried and pregnant. She recounts with grim precision the abortion she had, up to and including her need for hospitalization afterward. It’s a devastating, chilling account of what things were like in our not so distant society. And she does not hold back.

Ashley takes is a no-nonsense, Southern gal: she suffers no fools but it brutally honest about herself and the events in her life. There is no glossing over her insecurities – from acting school, to the dismissal she received from her peers from the success of her first Broadway play (seen as commercial and not art). There is no stone which she leaves unturned in talking about her chosen profession, or the work she’s had to do and speaks of her successes and failures with considerable nonchalance.

She doesn’t delve very deeply into her childhood or her family life – just glimpses here and there of an impoverished upbringing, her lack of education, etc. The book is more a window into her life as a reflection of her career; all the more interesting since she wrote this in 1978. Her career has continued steadily, becoming one of the prime interpreters of her friend Tennessee Williams’ plays and taking Broadway by storm last year in Dividing the Estate and August: Osage County.

I had great respect for Ms. Ashley prior to reading her book, but now that respect has grown tenfold and I hope she might consider a follow-up. These last thirty years must have given this salt of the earth actress many more tales to tell. And I sure as hell would love to read about them.

2 thoughts on “The Liz Ashley”