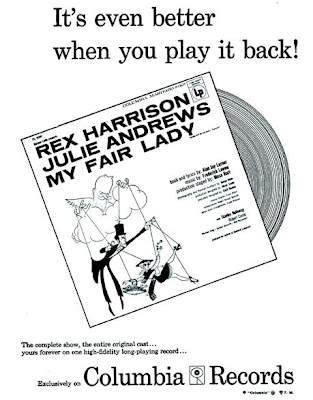 April Fool’s Day annoys me. Mostly it’s because everyone thinks they’re suddenly writing for The Onion and inundate the interwebs and my email box with attempts to “get me.” As a result, I tend to skip out new on this particular day – both real and faux, just because I prefer the facts (and not to be sallied with countless fake information, etc). However, that said, there is something wonderful happening today – Sony Masterworks is celebrating the launch of the Masterworks Broadway website. I first got wind of the new site a couple months ago and being the musical theatre geek, I immediately signed up for an account. (Come join me!)

The website has been dubbed “Where Show Tunes Take Center Stage” and they are not wrong. A few years ago, due to some corporate blah blah blah, Sony founds itself with both its own Columbia Masterworks catalogue as well as RCA’s. The consolidation brought about the new Masterworks Broadway label in 2006. The new catalogue will eventually feature 400 cast albums (about 275 are already available) and the productions represented have acquired 265 Tony awards, 450 Tony nominations and 27 Grammy Awards. Not too shabby.

Now, to celebrate and to bring it into the era of social media, they’ve decided to create a place for showtune lovers to gather. The aim of the website is to “document the history of the cast album from Finian’s Rainbow (even if Columbia’s first cast album was the 1946 revival of Show Boat, but that’s neither here nor there) to last year’s revival of West Side Story.“

The site allows the individual to establish an account, friend other album enthusiasts as well as browse through the catalog. Masterworks has planned that every single cast album under its label will eventually be released digitally. Some of the more famous titles: Annie, My Fair Lady, Sweeney Todd, Mame, Hello Dolly!, The Producers, A Little Night Music, The Sound of Music, Gypsy, among many many others. But now, many albums that are long out of print or have been hitherto now only available on LP will now be introduced to an entirely new generation of theatregoers (and as one who has collected many obscure LP cast albums, and has had many of them ripped to mp3 use I approve wholeheartedly).

They are continuing to build the site, with more albums to be added. A streaming radio of continuous Broadway musical is up and running. My pal Peter Filichia, who writes for Theatremania, is now hosting a new blog every Tuesday. There are also podcasts, including one recorded for the release of Stephen Sondheim collection The Story So Far and another on the 50th anniversary of The Sound of Music last year. Each recording has its own page and readers can rate, review, and purchase the albums through amazon or itunes. There is of course the obligatory message board forum for folks to rehash the perennial “Merman or Lansbury” debate.

In celebration of the site’s official launch, there will be a giveaway every day in the “You Gotta Get a Gimmick” sweepstakes. Some of the prizes include: A trip for two to NYC to see a Broadway show, the entire Masterworks Broadway catalog (over 275 CDs!), signed copies of Kristin Chenoweth’s memoir A Little Bit Wicked as well as her latest CD A Lovely Way To Spend Christmas, and a rare framed pigment print of Gwen Verdon from the Sony Music archives/ICON Collectibles. Every Tuesday and Friday the site will feature a prize related to the work of Jerry Herman and Stephen Sondheim respectively, including an autographed CD collection of their works. New prizes will continue to be announced throughout the month. Visitors can enter the daily drawing by visiting the site and signing up for free membership.