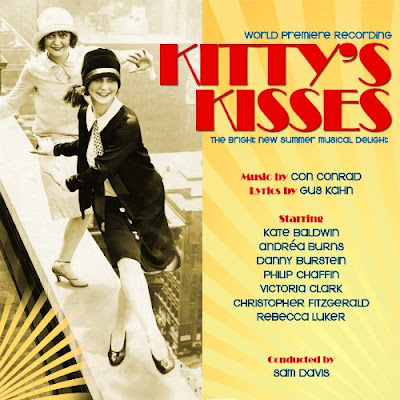 There was this musical about three years ago that came to Broadway by way of Canada. It was about a middle age recluse who listened to his favorite cast album as it came to life in his own living room. It won a few Tonys, was a decent hit and endeared co-librettist/star Bob Martin to the theatre world. The show was The Drowsy Chaperone, which glibly spoofed 20s musicals of a certain ilk, namely the light romantic musical comedy.

The first time I popped on the cast album of Kitty’s Kisses from PS Classics, I was immediately reminded of Chaperone, seeing the character archetypes and plot contrivances popular in the pre-Show Boat musical that are reflected on and spoofed in the later show. Kitty’s Kisses ran for 170 performances, not bad for a show of the era, back when it took a couple of months if not weeks to recoup. Though a success, it wasn’t a blockbuster like No No Nanette or Good News, and like many other likable period shows, fell by the wayside. Some of the songs by Con Conrad and Gus Kahn became hits (the liner notes mention that Queen Marie of Romania was particularly fond of the title song), but the show has been mostly forgotten, except as a footnote in musical theatre history books.

One of my biggest issues with The Drowsy Chaperone was its initial conceit, a point exemplified by the obscurity of Kitty’s Kisses. There was no such thing as an original Broadway cast album during the decade. It wasn’t until the 1930s that record producers started to experiment in preserving musical theatre scores. It seems a minor sticking issue, but it’s what’s kept Chaperone at bay for me. Though, I took less issue with the London production which adapted the show for the West End (the original London cast album predates the original Broadway cast album by quite a few years). My main beef – the Chaperone is pastiche. It’s sometimes amusing, but it’s mostly mediocre, coming off as a rehash of a rehash of a rehash (and truth be told, I hope and pray there is a moratorium on new 20s musical comedy spoofs).

But now we get a sample of the real thing, and what a superb treat it is. Kitty’s Kisses was a success in NY, then it went to London where it was merged with the Rodgers and Hart musical The Girl Friend (that’s something you don’t hear every day…). It was a charmer that got lost in the shuffle, and was eventually shelved in a New Jersey warehouse where it would have continued to languish were it not for Tommy Krasker. He stumbled upon the material while cataloging the Warner Bros music archive in the mid-80s and it is through his persistence that the restoration was done, with painstaking research and commitment as well as the blessing of Donald Kahn, Gus’ son (to whom the album is posthumously dedicated). Now after 23 years of hard work, he has given us an unexpected surprise this fall: an official cast recording of Kitty’s Kisses, billed as “The Bright New Summer Musical Delight.”

Rebecca Luker lends her shimming soprano to the title role, the innocent ingenue who finds herself at the center of the ridiculous period farce going on around her. The big scandal – Kitty poses as a married woman to get a hotel room and is mistaken for another married woman. Hijinks, mistaken identities and your usual machinations propel the plot (of which there is admittedly very little). But as was often the case, the script was an excuse for gags and light musical entertainment. The score is light, engaging and often delightfully clever with Kahn’s lyrics beautifully complemented by Conrad’s period sound. There are many studio recordings of scores that feel like a textbook document of a musical, rather than a vibrant cast album. I can’t remember the last time I’ve felt such joy and warmth from hearing a “lost” score.

The effervescent Kate Baldwin is the free-spirited Lulu, getting things off to a fresh start with the opener “Walking the Track.” Victoria Clark is an absolute riot as grand dame opera singing dowager Mrs. Dennison, who shares the duet “I Don’t Want Him” with Luker. The “Him” in that number happens to be played by Danny Burstein, while Malcolm Gets plays his brother. Andrea Burns and Christopher Fitzgerald take on the specialty material, originally created for vaudeville duo Ruth Warren and William Wayne. Phil Chaffin is Robert Mason, Kitty’s stoic love interest. Jim Stanek makes a brief appearance as the train conductor leading “Choo Choo Love.”

The album was not only produced by Mr. Krasker, but he has supplied a concise, informative essay on the show, its fall into obscurity and its restoration and resurrection. The show’s synopsis is provided by Robert Edridge-Waks. Orchestration was provided by Sam Davis, who also conducted the recording. The CD booklet also contains various production photos and images of newspaper clippings as well as the program from the Newark tryout.

According to the Krasker, the material for the finale ultimo was never recovered. The show ended on Broadway with a song called “Steppin’ on the Blues,” (with additional music by Will Davidson) and I can only assume that the song itself is also lost. The powers behind the album have created a brand new finale ultimo for the show using the composing duo’s Oscar-winning song “The Continental” from the 1934 film The Gay Divorcee. It doesn’t quite gel with the rest of the score, but it’s a cute way of wrapping things up.

This is the third in a line of score restorations for the label; they released Vincent Youman’s Through the Years in 2001 and Kay Swift’s Fine and Dandy in 2004. I cannot stress how wonderful it is that the folks at PS Classics have taken the time to painstaking refurbish a show like Kitty’s Kisses. In the late 1980s and 1990s, John McGlinn was pretty much the go-to archivist with an emphasis on the works of Jerome Kern, while John Mauceri took care of the Gershwin canon. Those albums, however, were intent on restoring the works of major composers. However, the audience for show music sadly appears to be shrinking and shrinking, so less recordings like these are less likely to be made. John Yap make a series of full studio cast albums of entire vocal scores, but given the economy has left them sitting on the shelf (including the full album of One Touch of Venus made with Melissa Errico). It’s unfortunate, as each of these recording provides musical theatre fans with a further link to the history of the genre. I only hope it’s not another five years until PS Classics releases its fourth restoration.