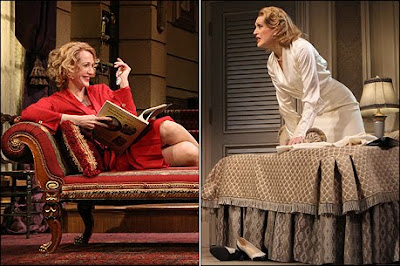 Speaking of the “Royal Family,” I’m especially heartened that Jan Maxwell was nominated for best actress for her smart, delicate and eccentrically witty performance in that play, as well as for her supporting work in “Lend Me a Tenor.” Ms. Maxwell is one of the best and most undervalued actresses we now have in the New York Theater, and if this helps keep her in our line of vision, I’m all for it. And I hope she wears a really terrific dress to the Golden Globes – I mean, the Tonys. Psst, Ms. Maxwell, I know somebody who works at Chanel.

IN HIS review of “Gypsy” on Broadway, the Times critic Ben Brantley noted that the star Patti LuPone had gotten her role down so brilliantly that “she had made me eat my hat.” Previously, he’d given her a lukewarm review.

Indeed, after he saw Patti blow the audience away at the St. James Theatre, Brantley gave her the rave she deserved. The next day she sent him a chocolate cowboy hat in a deluxe hat box, with the note, “I hope you’re laughing.”