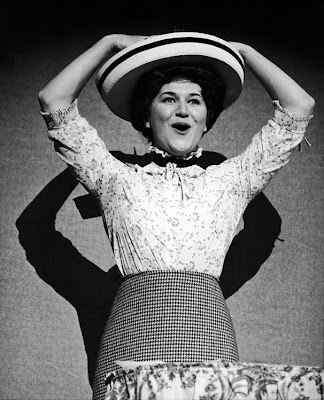 Here’s a press shot of Patricia Routledge in her Tony-winning performance as Alice Challice in the failed Jule Styne-Yip Harburg musical Darling of the Day. The show lasted 31 performances at the George Abbott Theater (now the site of the Michelangelo Hotel) in 1968. In spite of the musical’s fast failure (which lost an astronomical $750,000), there are many merits within the show and score; friends and fellow bloggers know that I have long championed a revival.

Alice Challice is something of an unsung heroine of the musical theatre. She’s warm, vibrant, vivacious and pragmatic – a young widow living quietly in Putney who refuses to conform to the loneliness of widowhood. Endeavoring to get married, she uses a marriage broker to establish a correspondence with a nobleman artist’s valet. The role calls for a sensible, yet fun-loving comic soprano, “youngish,” whose material runs the gamut from tender ballads to raucous music hall numbers. There aren’t too many theatre fans familiar with Alice, but if they were it’s likely they would fall madly in love with her.

The show, which was a troubled vehicle for Vincent Price (!), failed rather miserably. It was based on Arnold Bennett’s comic novel Buried Alive about a shy British artist (Price) who switches identities with his dead valet “get out of the world alive” In doing so, he also takes up the deceased’s association with the Widow Challice, with whom he falls in love. An expectedly convoluted farce ensues where he paints under his pseudonym and is found out by snobbish art dealers, when all hell breaks loose.

Out of town reception was rather bleak, with critical pans in Toronto and Boston (in the latter city, Peter Filichia said it was one of the worst musicals he had ever seen, but much improved when he saw it in NY). There was a lack of steady direction, with four directors, two choreographers and five bookwriters. (Nunnally Johnson removed his name prior to opening night leaving the libretto without a credit). In spite of all this trouble the musical actually received a surprising amount of positive reviews. The only full-out pan was the estimable New York Times. Clive Barnes opted out of reviewing the show for the paper and it went to second stringer Dan Sullivan instead, who filed his wholly negative assessment. Barnes himself actually visited the show shortly thereafter and looked on it favorably. The Times also had Walter Kerr in the show’s corner, offering his Sunday column as a valentine to her many abilities. Kerr gave the leading lady one of my favorite pull-quotes of all time: “If you don’t catch her act now, you’ll someday want to kill yourself.” (He immediately added “I’ll help you.”)

Lying in the rubble of the show was Routledge’s Tony win (an award she shared with Leslie Uggams of Hallelujah, Baby!) is the show’s original cast album, which is a charming delight and showcases two major assets – Routledge and the elegant and vibrant score by Styne and Harburg (Styne considered this his “Lerner & Loewe” score and his second favorite of his own musicals behind Gypsy). The show has been rather well-received recently in a couple of engagements at Mufti, which saw revisions made to the book and score in an attempt to refurbish the vehicle. Those revisions were supervised by Erik Haagensen, playwright and Backstage critic, who also made an attempt to fix Routledge’s other failed Broadway musical, 1600 Pennsylvania Avenue in the early 1990s.

There was a shoddy live recording made of the show’s opening night performance which plays like a raucous hit. The audience lapped up the stars, doling out entrance applause for the two above the title, as well as character actress Brenda Forbes. The most vociferous reactions were reserved for Routledge, who stopped the show with her first number “It’s Enough to Make a Lady Fall in Love, as well as her reflective “That Something Extra Special” towards the end of the first act. The actress all but reduced the theatre to rubble with her eleven o’clock number “Not on Your Nellie.” During her ovation for the latter (which lasted a full minute), she can be heard very faintly asking incredulously “Is this all for me?” then after a beat pleading the audience “Ladies and gentlemen, if you please.” The audience took this as a cue to give one more cheer before allowing the company to the continue.

As I sit here writing, I realize that the musical opened on this day forty-two years ago. It’s a show that isn’t licensed for stock/amateur performances and has had very few revivals, the RCA cast album has been out of print for many years, but has resurfaced recently via ArkivMusic. The show remains off the beaten path, a lost gem that has brought me a great deal of joy.

Should Encores! (as I want to hear those vibrant orchestrations from Ralph Burns) take up the show, there is only one person in my estimation who should play Alice Challice (and I have Ken Mandelbaum’s agreement on this front) and that is Victoria Clark. What strikes me the most about this particular press shot is the uncanny resemblance between Clark and Routledge, as they share a similar voice type, sensibility and the honor of the Best Actress in a Musical Tony. By extension, I think David Hyde Pierce is ideal for the artist. Then I’d toss in Gavin Lee for the music hall numbers, and Edward Hibbert and Judy Kaye as the noblesse-oblige for good measure.

Darling of the Day is a gem just aching for rediscovery.